A year after almost quitting tennis in despair, a revitalised and resurgent Sam Stosur has emerged from the darkness to be a French Open challenger once more. 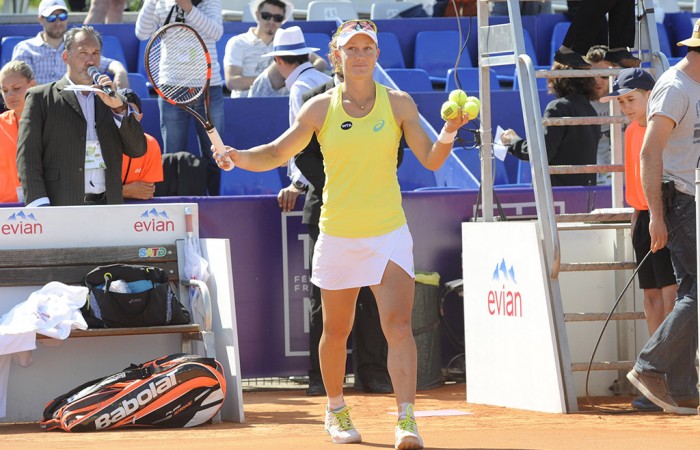 A year after almost quitting tennis in despair, a revitalised and resurgent Sam Stosur has emerged from the darkness to be a French Open challenger once more.

Stosur is spearheading Australia’s 11-strong singles assault in Paris as the country’s top-ranked player for the sixth straight year.

But unlike last year when the former Grand Slam champion arrived at Roland Garros fighting mental demons and a niggling urge to give the game away, Stosur “couldn’t be happier” entering the claycourt major.

In her first match in 20 months back under Taylor’s wing, the 2010 French Open finalist returned from a calf injury to snap the 11-match, two-title claycourt winning streak of German Angelique Kerber in Madrid.

Stosur was back in the game again and, a month on, the one-time US Open champion and world No.4 crowned her comeback on Saturday (Sunday AEST) with a first WTA title since last October.

“I’m doing all the things I want to be doing heading into a Grand Slam.”

Stosur’s positive mindset is a far cry from when she questioned her future in the sport following a demoralising first-round loss to Swiss qualifier Timea Bacsinszky at last year’s Estoril Open.

Tired of blowing one-set leads and throwing matches away, the usually upbeat Queenslander had had enough.

“In Portugal last year, it (retirement) was front and centre,” Stosur said ahead of her first-round French Open clash with American Madison Brengle.

“I wasn’t in a good place and I wasn’t enjoying my tennis at all. All the way up to the French Open I struggled.

“There was still a long way to go before making that decision, but it wasn’t fun being on court for a long time.”

It’s fun now, though, and Stosur credits Taylor with freshening up her game and restoring the optimism.

During a six-year partnership, Taylor was in Stosur’s corner not only for her charge to the 2010 final in Paris and her stunning victory over Serena Williams in the 2011 US Open final, but also for runs to the last four in Paris in 2009 and 2012.

“It’s only been four or five weeks but it was a pretty easy transition. Dave knows my game and what to expect and it’s kind of like it never stopped,” Stosur said.

Reuniting with Taylor wasn’t all straightforward.

He has two young daughters and has also been busy coaching Croatian-born Australian Ajla Tomljanovic since the end of 2013.

But after convincing him, Stosur and Tomljanovic joined Taylor at his Liechtenstein base after Australia’s Fed Cup tie last month in the Netherlands.

“I had to make sure Ajla was okay with it and thankfully she was,” Stosur said two days after edging Tomljanovic in a three-set quarterfinal in Strasbourg.

“Obviously there’s less time and if you’re both on court at the same time, it can be difficult.

“Even for our match (last Thursday), he sat in the players’ lounge and watched it on TV.

Stosur, Tomljanovic and fellow Australians in the bottom quarter of the women’s draw – Casey Dellacqua, Daria Gavrilova and Jarmila Gajdosova – all launch their Open campaigns on Monday.