Aussie young guns Destanee Aiava, Jaimee Fourlis and Seone Mendez have made their debut on the WTA rankings following strong results on the Pro Tour. 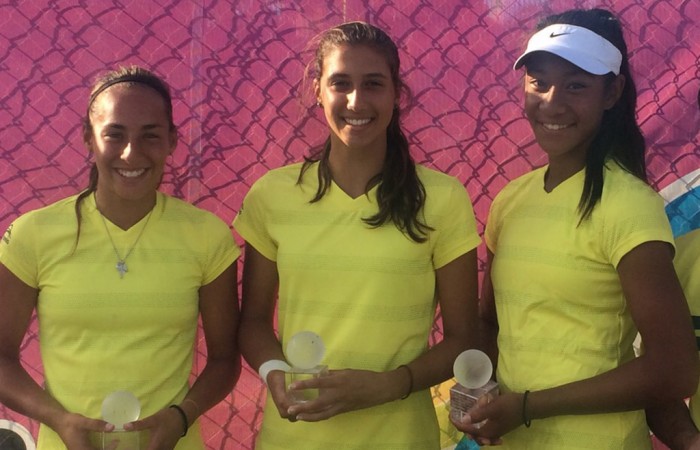 A trio of Aussie young guns have made their debut on the WTA rankings following strong results on the Pro Tour.

Teenagers Destanee Aiava (No.847), Jaimee Fourlis (No.930) and Seone Mendez (No.1,207) all achieved their first professional ranking this week after their performances at the Melbourne Park Tennis International; Mendez reached the second round, Aiava the quarterfinals.

Fourlis, impressively, won through to the semis as a qualifier.

All three have been representing Australia for the past week in the Junior Fed Cup Asia/Oceania final qualifying event in Shepparton, and helped the hosts top the competition and qualify for the World Finals in September.

The Melbourne Park event was won by 18-year-old Victorian Zoe Hives, who soared 184 places to a career-high ranking of No.493.

Hives has been in a rich vein of form on the Australian Pro Tour of late, reaching the semifinals in Mildura on grass as a qualifier and then progressing to the quarters in Mornington.

Sally Peers, who reached the final at Melbourne Park before falling to Hives, jumped 272 spots to world No.680.

Peers qualified for the main draw in Melbourne before progressing to her first ITF final in four years.

Other Aussie teens also enjoyed rankings success this week after reaching the quarters at Melbourne Park; Priscilla Hon rose 27 places to 504th while Kimberly Birrell – currently in the Netherlands as the Australian Fed Cup team’s “orange girl” – leapt 46 places to No.606.

On the men’s side, Matt Ebden enjoyed an encouraging move up the ATP ladder after reaching the quarterfinals of the ATP Challenger event in Batman, Turkey.

After an injury and illness-plagued 12 months, Ebden this week jumped 30 places to No.329.

The in-form Matthew Barton also continued his push up the rankings, rising 14 places to 368th after reaching the final at the Mornington Pro Tour event a fortnight ago.

The biggest rise for the Aussies inside the top 100 was Sam Groth, who jumped nine places to No.84 after winning his opening-round match at the US Men’s Clay Court Championship in Houston, Texas.

Meanwhile, Bernard Tomic achieved a new career-ranking; he rose one spot this week to 26th.