Bernard Tomic, Sam Groth and Marinko Matosevic will feature in the ATP Acapulco action while Sam Stosur and Casey Dellacqua have headed to Doha, Qatar. 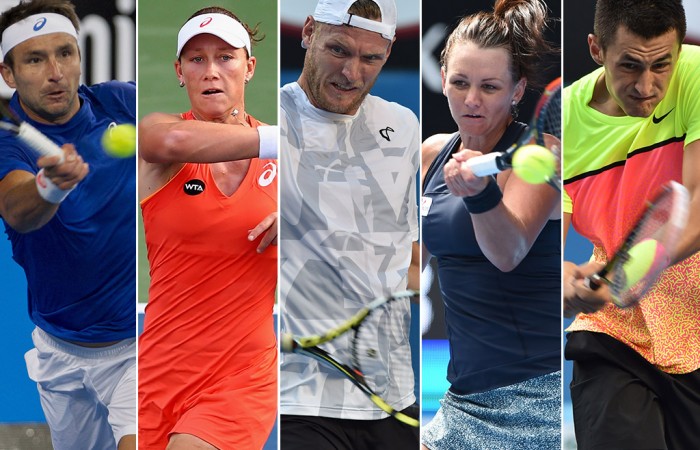 Australia will field yet another large contingent of players across ATP and WTA events in Acapulco and Doha.

A trio of Aussie men – Bernard Tomic, Sam Groth and Marinko Matosevic – are in action this week in Acapulco, an ATP 500-level event on hard court in Mexico.

Looking to join them in the main draw is Thanasi Kokkinakis; the Aussie teen has opened his qualifying campaign on a strong note with a straight-sets defeat of No.2 seed Lukas Lacko.

Standing between him and a place in the main draw is fifth seed Alejandro Falla of Colombia.

Of the three Aussies in the main draw, Groth faces the toughest opening-round test after being drawn to face No.5 seed Alexandr Dolgopolov.

Groth has also landed in the quarter of the draw headed by top seed and world No.5 Kei Nishikori.

Tomic and Matosevic, meanwhile, have been placed in the bottom quarter of the draw.

Tomic, fresh off his semifinal finish in Delray Beach, will take on Frenchman Adrian Mannarino in round one, while Matosevic will battle Marcel Granollers of Spain.

Should the pair keep winning, they could meet in the quarterfinals, yet No.2 seed David Ferrer is a potential second-round opponent for Matosevic and arrives in Acapulco having won last week’s Rio Open.

In the women’s tournament, Brisbane-based Ajla Tomjanovic will take on a qualifier in her opening-round match, with a potential second-round battle looming against top seed and world No.2 Maria Sharapova.

In Doha, Sam Stosur and Casey Dellacqua will fly the Aussie flag at the $730,000 WTA Premier event.

On a positive note, Stosur won her last match against Safarova in Sydney last month – taking her career head-to-head against the Czech to 3-9 – while Dellacqua pushed Williams to three tight sets the last time they met in Miami last year.

Daria Gavrilova is poised to join the Aussie duo in the main draw; the Russian-born Aussie has won two rounds of qualifying and faces Hsieh Su-Wei for a place in the main draw.

Jarmila Gajdosova’s qualifying campaign came to an end in the second round when she lost in three sets to Romania’s Alexandra Dulgheru, while Anastasia Rodionova fell at the same hurdle to Kazakh Yulia Putintseva.