Australia's Sam Stosur has booked a place in the second round of the Dubai Tennis Championships with a 6-3 6-1 win over Croatian qualifier Mirjana Lucic-Baroni. 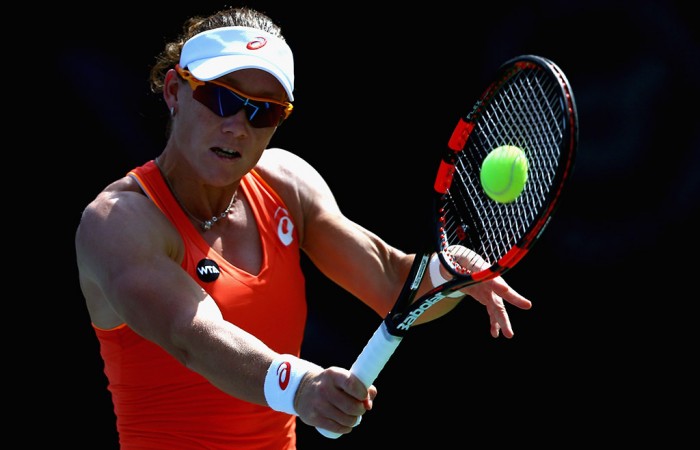 Australia’s Sam Stosur has booked a place in the second round of the Dubai Tennis Championships with a 6-3 6-1 win over Croatian qualifier Mirjana Lucic-Baroni.

Casey Dellacqua also got off to a winning start in Dubai; the wildcard saw off lucky loser Katerina Siniakova of the Czech Republic 6-3 6-4.

Jarmila Gajdosova has joined her fellow Fed Cup teammates in the main draw, winning two matches to come through qualifying.

Arina Rodionova, who also qualified, fell in straight sets in the opening round to Frenchwoman Caroline Garcia.

Fellow former Grand Slam champion Svetlana Kuznetsova went through on a walkover when her opponent, Kaia Kanepi of Estonia, retired while down 4-1 in the opening set with a back injury.

Wildcard Flavia Pennetta of Italy survived four match points in the second set before pulling off a 2-6 7-6(3) 6-4 first round win over lucky loser Julia Goerges of Germany.

“I was almost crying on the court today because I was feeling so bad,” Pennetta said.

The 10th-seeded Pennetta trailed 5-2 in the second set at Dubai Tennis Stadium but held serve and went on to close out the set with an ace in the tiebreaker.

Pennetta led 4-1 in the decider before Goerges briefly rallied.

Sabine Lisicki of Germany fired a total of 16 aces to win her first singles match in 2015, beating Monica Niculescu of Romania 6-3 6-4.

“I obviously had three tough losses at the beginning of the year, all tough three setters, and you always want to get the first win of the year and I did finally,” said Lisicki, who finished with three straight aces.