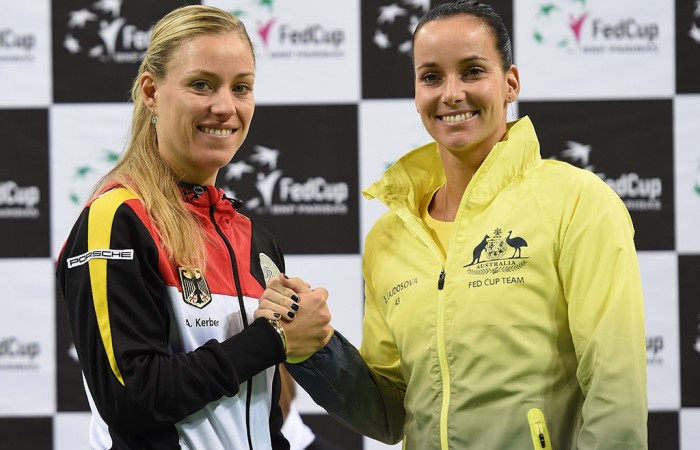 Gajdosova’s ranking plummeted to 334th in March 2014 as she battled to return from a debilitating bout of mono but she’s since fought back to world No.54.

The 27-year-old had a strong Australian summer, including wins over top 20 opponents Petkovic and Dominika Cibulkova in Sydney, and Molik believes she has the powerful game to cause a boilover against world No.10 Kerber.

“She (Gajdosova) is playing tomorrow because I really believe and firmly believe she can beat Kerber,” Molik told AAP on Friday.

“I think out of Casey and Jarka, I think Jarka’s game is a game that matches up really well to (Kerber’s).

“She’s aggressive, she’s going to take Kerber head on and there’s going to be a lot of big hitting but that suits her.”

Gajdosova was overlooked for last year’s semifinal loss to eventual runners-up Germany as she rebuilt her career from an illness that made it hard to get out of bed, let alone play tennis.

“Being back here is a huge step,” Gajdosova said.

“In the summer I finally felt healthy and feel like I can actually train properly and compete. I don’t have pains every day I wake up and I’m not exhausted every day I go to bed. I’m enjoying my tennis again and hopefully I can keep getting even better.”

Dellacqua, 29, was overlooked for the singles despite working her way back from serious injuries to climb to 35th in the world.

She has been named for Sunday’s doubles alongside Stosur, who could play in every fixture of the tie, though Molik has hinted she could make changes on day two.

Sabine Lisicki and Julia Goerges were named as the German doubles pairing.

The winner of the tie faces either Poland or Russia in the semifinals with Australia chasing a first title in 41 years.