Akira Santillan is just two wins away from becoming the boys' singles champion at the 2015 Australian Open. 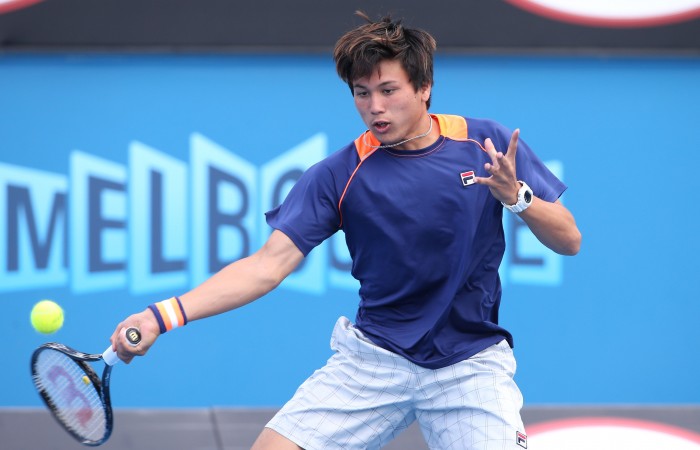 Akira Santillan has the opportunity to emulate his friend Nick Kyrgios after he won through to the semifinals of the boys’ singles at the Australian Open on Thursday.

Kyrgios won the event in 2013 and the 16th-seeded Santillan is now the lone Australian remaining in this year’s draw.

The 17-year-old from Brisbane upset the tournament’s 6th seed Duck Hee Lee from South Korea 6-4 3-6 6-3 in their quarterfinal. He says he would love for his career to take a similar path to that of Kyrgios.

“Nick’s doing really well, I think he won this tournament two years ago. Since then he’s just got better and better. I look up to him and hopefully I can reach that stage also.

“I’ve spoken to him a couple of times (this week). He offered for me to come and watch him play against Murray, but unfortunately I had my doubles.”

After being quite disappointed in his third round performance, it was a much more buoyant Santillan in light of his quarterfinal victory.

“It’s my first semifinal of a Grand Slam so it’s a pretty good feeling.

“I’ve been struggling the whole tournament so to come out in the semis and play a little bit more confident tennis, it is pretty good.

“I can play better, but I’m pretty happy with the way I’m feeling.

“The last couple of days I’ve just been struggling to find the ball, to hit through the ball. Today, it’s getting close to how I want to hit the ball.”

In a nervous conclusion to the quarterfinal, both Santillan and Hee Lee traded breaks of serve before the Australian pounced on a chance late in the match.

“The last set was up and down really.

Santillan will now play another South Korean, Seong-chan Hong in the semifinal on Friday.

Should he manage to go all the way, Santillan would become the fifth Aussie in the past nine years to win the boys’ singles title at the Australian Open.

He says that he is familiar with the style of the 7th seed after meeting him on two occasions in the past.

“I have played him twice, beat him once, both have been tough matches. He is very consistent and really fast around the court, I think it is going to be tougher than today.

“I think I will have to go out there and be mentally strong, keep the balls in and be consistent also. He can also break down at times, I’ve played him a couple of times and he has done that.

“I have always been ahead in our matches, I lost last time but I was up 4-0 in the third. I was tired physically but this time I think I have physically prepared myself and, hopefully, mentally too.”

With his most recent result against his semifinal opponent being a loss, Santillan signed off with a short but determined message.

“He obviously got his revenge on me, so this time it’s time to get my revenge back.”

Earlier, Marc Polmans went down to the tournament’s No.1 seed Roman Safiullin 6-4 6-2.

It was a successful tournament for the 17-year-old who progressed one step further than he did in 2014.

He says he is happy with his start to the year and something that he can build on.

“It’s good, especially at my home Slam, to make the quarters is a good effort I think and a positive start to 2015.

“There is definitely a lot of positives to take away, I had a few break-points in the second set and I could have leveled it.

“I’m just happy that I played more aggressive today and gave myself a better chance.”

Polmans was left to play almost half of the match off his second serve after managing to land only 58% of his first serves. He acknowledges that it could have been a different story had he have found some rhythm in that department.

“I played a bit more aggressive when I could. But it still felt like I was being dictated to a bit more of the time. I think that was just due to me getting pushed on my second serve.”

“It was definitely better than last time. Last time I think I was stuck on the base line for every point. Today, in the first set I was pretty even with him.”

Polmans’ tournament is far from over. He teamed up with fellow Aussie Jake Delaney later on Thursday to win through to the final of the boys’ doubles. They will now take on the tournament’s 8th seeds Hubert Hurkacz and Alex Molcan  at Melbourne Park on Friday.