With conferences completed; wild cards submitted; seedings set and the draw announced, everyone is eagerly anticipating the commencement of the 2015 Asia-Pacific Tennis League (ATL) Playoffs. 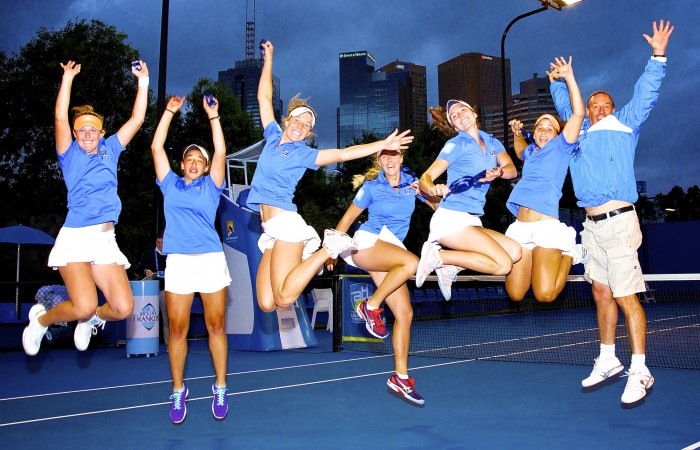 With conferences completed; wild cards submitted; seedings set and the draw announced, everyone is eagerly anticipating the commencement of the 2015 Asia-Pacific Tennis League (ATL) Playoffs.

The Playoffs bring together eight Men’s and eight Women’s teams from the Asia-Pacific region. A mix of winning teams from Australian ATL conferences will pit themselves against their Asia-Pacific counterparts over two days.

The pinnacle of domestic team based tennis, the ATL Playoffs sees teams vying for a winner’s cheque of $20,000 and bragging rights across the Asia-Pacific. A trailblazing competition showcasing the new FAST4 format, fans will be in for some scintillating tennis.

On the men’s side the Royal South Yarras head into the Playofffs as top seeds and possess a strong line-up including Luke Saville (ATP164), Alex Bolt (ATP188), JP-Smith (ATP198) and doubles specialist Adam Hubble.

They will have their challengers though, and in the knife edge FAST4 ATL format, contenders could appear from any number of teams! The Japan Phoenix have recruited wildcard Brydan Klein (253) to join their strong line-up.

Likewise, the Tennis Brisbane Chargers stormed to victory in the Northern Conference and come with some serious ATL experience. With the induction of world number 238 Ben Mitchell, their team has some real depth with Maverick Banes (ATP357), Gavin Van Peperzeel (ATP485) and the experienced Robert Smeets.

In the women’s field the Bayside Thunder possess arguably one of the strongest female ATL teams ever seen. Olivia Rogowska (WTA134), Daria Gavrilova (WTA158), Arina Rodionova (WTA252) and Storm Sanders (WTA454) will lead the way for the Thunder.

Current world number 62 Jarmila Gajdosova will be looking to spearhead the Tennyson Volt into contention and fly the flag for the Queensland contingent. There have also been some strong wildcard announcements with Irina Falconi (WTA111) and Katarzyna Piter (WTA177) added to the team lists of Shaw Park Sharks and Flagstaff Freighters respectively.

Teams are awash with up and coming Australian players and the future of the sport will be on display.

ATL Playoff action commences from 11am today on the western courts of Melbourne Park. Fans can purchase a ground pass and head out to courts 10 – 15 to see all the action, excitement and energy that ATL has to offer.

To stay up to date with all the latest scores and action from the ATL, visit atl.tennis.com.au