Australia has gone down 2-1 in an entertaining Hopman Cup tie against France. 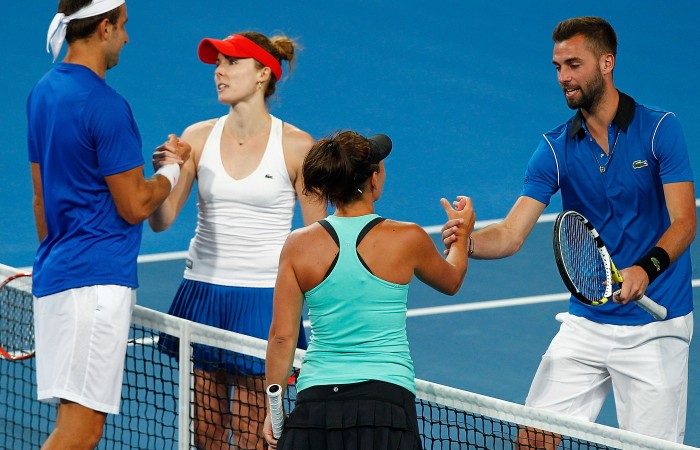 Journeyman Marinko Matosevic produced some fly-in heroics, but it wasn’t enough to lift Australia to victory in their Hopman Cup tie against France.

Matosevic, who less than 24 hours earlier made a mad dash from Brisbane to Perth to replace the injured Matt Ebden, appeared to be in a world of trouble after going a set and a break down to Benoit Paire on Wednesday night.

But spurred on by the parochial Perth crowd, Matosevic reeled off 10 of the next 12 games to secure victory and level the tie at 1-1 after Casey Dellacqua lost to Alize Cornet in three sets earlier in the night.

Matosevic said Tuesday’s first-round loss at the Brisbane International was softened by his Hopman Cup call-up and singles victory.

“I went from a devastating low to a dizzying high,” Matosevic said.

“I arrived last night at midnight. The time difference is never easy.

“But then the crowd really helped me out there and gave me some energy. I kept on feeding off them for the rest of the match.

“I remember as a kid, I’d always watch the Hopman Cup with my folks. So now to get a chance to play it – it’s a dream come true.”

Meanwhile, Dellacqua insists there’s no need to worry despite opening her year with back-to-back singles losses.

Dellacqua, who was beaten 6-2 6-3 by Agnieszka Radwanska on Sunday, crumbled when it mattered most on the way to a 4-6 7-5 6-1 loss to world No.18 Alize Cornet on Wednesday night.

At 5-5 in the second set, Dellacqua had the chance to push for a straight-sets win.

Instead, Cornet won eight of the next nine games to wrap up victory in 120 minutes, with Dellacqua committing 52 unforced errors for the match.

“I can take lots of positives,” Dellacqua said.

“Obviously it’s only the second match of the season, so it’s not a time to go, ‘Oh gosh, it’s chaos’.

“When you haven’t played for a while it’s a matter of making sure you’re switched on for the whole match.

“And when you play a lot of matches, you instinctively do that. Maybe I just lost my concentration a little bit there. That just allowed her to find her rhythm a bit better.”

Dellacqua has a golden chance to snare her first win of the year when she takes on Great Britain’s Heather Watson on Friday night.