UPDATE: Poland has cemented a 3-0 victory over Australia at the Hopman Cup following excellent showings by Agnieszka Radwanska and Jerzy Janowicz. 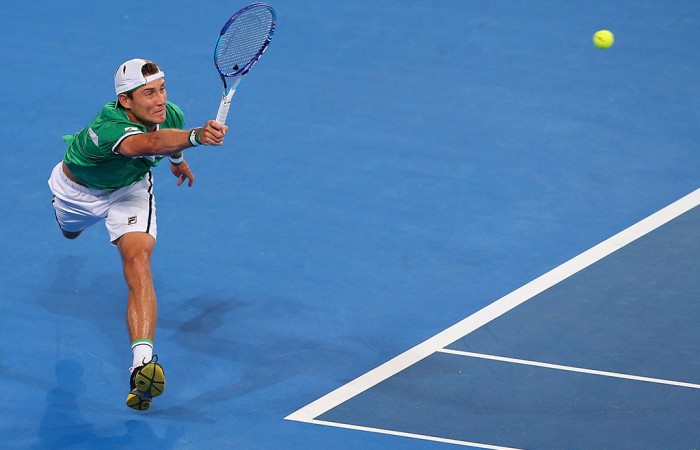 West Australian Casey Dellacqua was focusing on the positives despite suffering a first-up Hopman Cup loss to world No.6 Agnieszka Radwanska on Sunday night.

Dellacqua produced some rusty shots in key moments but at least found herself in good positions during the 6-2 6-3 loss at Perth Arena.

The 29-year-old led 3-1 in the second set, but conceded the next five games to lose the contest in 75 minutes, giving Poland a 1-0 lead in the tie.

Jerzy Janowicz later made it an unassailable 2-0 lead by coming from behind to beat Matt Ebden 3-6 7-5 6-0.

“I had some good stuff tonight, and then there was some stuff where I set the point up and didn’t execute the best,” Dellacqua said.

“Hopefully as matches go on, that starts to improve. They are things you can improve, and they’re little things you can work on. I can go out for the next two days and work on finishing balls or different shots.

“It was an extremely tough match first up, but I gave what I had. Obviously it wasn’t good enough to beat someone like Radwanska.

“I haven’t played for a couple of months, so it’s good to find my feet.”

World No.231 Ebden, who received a dream Hopman Cup call-up when Nick Kyrgios pulled out with a back injury, looked strong early as he served-and-volley his way to a set and a break lead over Janowicz, a Wimbledon semifinalist in 2013.

But after failing to serve out the match leading 5-4 in the second, Ebden became increasingly hampered by a calf injury, while Janowicz settled into the contest.

His powerful game beginning to fire, he closed out victory after a dominant final set.

Ebden, who was only handed a Hopman Cup berth after Nick Kyrgios pulled out with a back injury earlier in the week, will attempt to return for Australia’s tie against France on Wednesday night.

“I just tweaked my calf running forward, I think the 15-all point,” Ebden said.

“In the last few days it’s something I’ve been having worked on.

“Hopefully it’s not serious. I can still move a bit, so it’s a good sign that it’s not too bad.

“But it kind of scared me a bit. I heard a little click in my leg. It makes you panic a little bit. But hopefully it’s fine.

“I’m optimistic (I can play against France).”

World No.238 Ben Mitchell took Ebden’s place in the mixed doubles, which was played in a Pro Set format.