UPDATE: Daria Gavrilova and Arina Rodionova will meet in the final of the Australian Open 2015 Play-off after both came through their semifinal matches in straight sets. 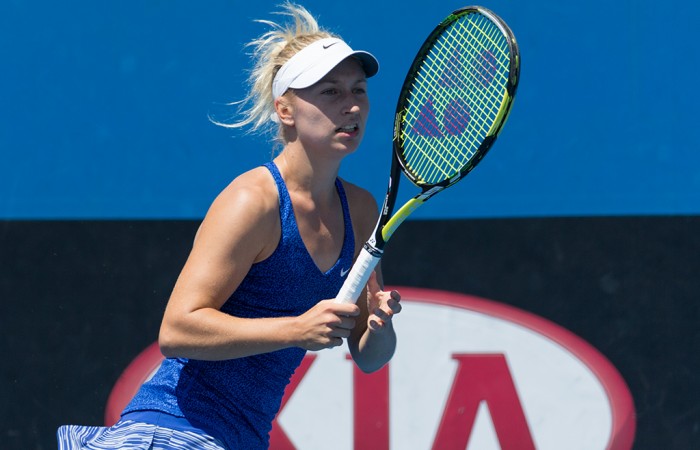 Daria Gavrilova has secured her place in the Australian Open 2015 Play-off final with a 6-1 6-3 victory over top seed Olivia Rogowska on Saturday.

She will meet Arina Rodionova, who later in the day secured a 6-3 6-1 win against 16-year-old Naiktha Bains.

Gavrilova was sharp from the outset on Court 6 at Melbourne Park, moving well, hitting strongly and remaining positive throughout the contest.

She broke serve in the fourth game to open up a 3-1 lead, and ran away with the opening set.

“She likes to take time away from the opponents, so I think my reactions were pretty good and I thought I played well,” Gavrilova reflected.

Rogowska did manage to turn her fortunes around in the second set, breaking early and moving ahead 2-0.

But the inspired Gavrilova – who had lost to Rogowska in their last meeting two years ago on the Australian Pro Tour – remained undeterred, and broke straight back.

“That’s what I’ve improved since I came here – I just told myself to stay tough, hang in there, if you win this game you’ll have a chance to win that (second) set,” she said.

Indeed, she reeled off six of the ensuing seven games; in the final game, she produced a sizzling forehand passing shot winner on the run to reach match point, and sealed victory when Rogowska sent a shot long of the baseline.

It was a similarly comprehensive win for Rodionova, whose experience, speed and power all combined to prove too much for the teenaged Bains.

Bains, who had beaten Arina’s sister Anastasia in the first round of the Play-off, was unable to snare her second Rodionova scalp of the week, undone by errors and double faults as the second set progressed.

It is Rodionova’s second straight appearance in the Play-off final; last year she fell to Casey Dellacqua.

“I had a pretty easy draw compared to other years and since my sister got injured my half of the draw was pretty open. For me I kind of had to make the final so I’m just glad I made it, and now just see what happens in the final,” she said.

“I like playing under (that kind of) pressure, I think it helps me.”

Rodionova quickly built a 5-2 lead in the opening set before serving it out two games later, and broke serve early in the second set with a scorching backhand winner up the line to lead 2-1.

Bains showed flashes of brilliance, advancing on the net and producing a number of athletic volley winners.

Yet she was constantly on the back foot as Rodionova took control of points from the first shot with her power and intensity.

“I really like her game at the net,” Rodionova observed.

“She comes in at the right time and she knows how to volley, so hopefully that part she’ll keep working on, and yeah, good luck to her.”

On facing Gavrilova in the final, Rodionova said she would have to put aside the fact that they are good friends and concentrate on the wildcard at stake.

The Australian Open 2015 Play-off women’s final will be staged at Melbourne Park on Sunday from 11am, followed by the men’s Play-off final between No.2 seed John-Patrick Smith and defending champion Jordan Thompson.