UPDATE: Harry Bourchier and Olivia Tjandramulia have taken out the 18/u Australian Championships titles on Saturday. 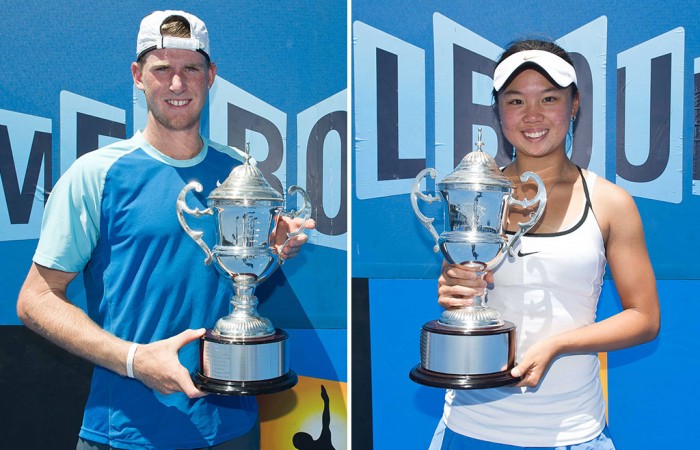 Tasmanian top seed Harry Bourchier has gone one step further than last year and taken out the 18/u Australian Championship title with a 7-5 6-3 defeat of second seed Marc Polmans.

Later on Saturday, Olivia Tjandramulia held off a late challenge from second seed and reigning champion Maddison Inglis to win the girls’ 18/u crown.

Playing for the third time in short succession, Bourchier and Polmans have developed a healthy respect for each other and – despite the blustery conditions – the match was always set to produce some great tennis.

“I just had that extra belief today.”

As the match unfolded, the crowd was not disappointed. The first set reached 5-5 without a single break of serve as both players entertained with their powerful groundstrokes from the back of the court.

With Polmans serving to take things into a tiebreak, Bourchier found another gear and ripped three clean winners to earn himself a set point. He didn’t falter, and a miss from the 17-year-old Victorian handed Bourchier the opening set.

A slightly unnerved Polmans then gave away his opening serve in the second set as the Bourchier momentum continued to build.

“The wind died down a lot and I was able to really set up and hit the ball and get good balance,” Bourchier said about his surge during the middle of the match.

To his credit, Polmans was able to fight his way back into the kind of form that had seen him reach the final without the loss of a set.

However, Bourchier remained extremely solid and maintained his early advantage throughout the second set, eventually serving out the match.

“It’s a good win. Vocally, you could tell [Polmans] was around until the last point. He just works like a machine every point,” he said.

“I was happy to get out of it today.”

“Definitely. I’ve got nothing to lose.”

Meanwhile, third seed Tjandramulia of Queensland said it had been a long-held dream of hers to contest the 18/u Australian Championships.

“When I was playing Nationals from the 12s – just watching the 18s play – I just really wanted to play.

The 17-year-old from Rockhampton was quick out of the blocks, using the windy conditions to her advantage, maintaining her court position and continually keeping her opponent off balance. In quick time, she had surged to a 6-1 5-2 lead before Inglis rallied to mount one last charge.

Despite some tight moments, Tjandramulia eventually closed out the match 6-1 6-4.

“I tried to keep my focus and stay clam and just win one more game,” she said.

“My game plan was to be up in the court and not let her dictate the point because she hits the ball really clean, so I tried to do that and take time away from her.

Tjandramulia is now looking forward to the opportunity of playing for a place in the main draw of the Australian Open when the December Showdown continues next week.

“[Today’s win] is a real confidence boost coming into the Play-offs,” she said.

> find out more about the Australian Open Play-off