Former junior whiz Hyeon Chung of Korea has romped to victory in the first round of the men's event at the Australian Open 2015 Asia-Pacific Wildcard Play-off in Shenzhen. 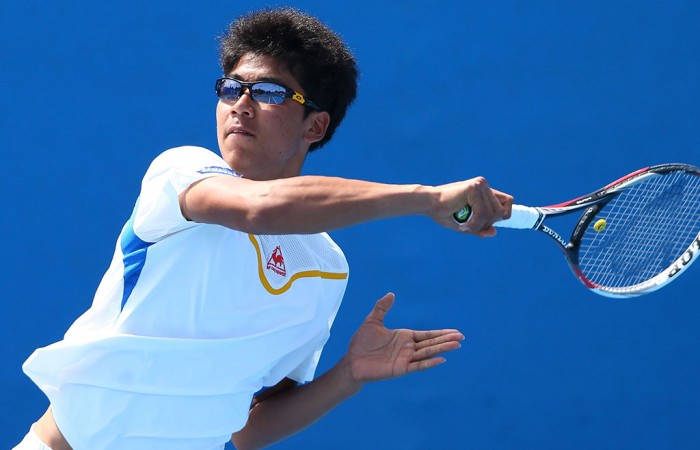 Korean teen Hyeon Chung has made an impressive singles debut on Day 2 of the Australian Open 2015 Asia-Pacific Wildcard Play-off.

The 18-year-old and tournament third seed romped to a 6-2 6-0 victory over China’s Cai Zhao. continuing the form that has seen him win four titles – three Futures and a Challenger – in 2014; a fifth could beckon in Shenzhen this week.

Second seed Yoshihito Nishioka moved one step closer to the Australian Open with a hard fought victory over fellow Japanese opponent Sho Katayama 3-6 6-1 6-4. Katayama lead 3-0 in the third set before the left-handed Nishioka surged home to take the deciding set.

Nishioka is no stranger to Grand Slam tennis after qualifying for the main draw of the US Open earlier this year, and will take on experienced local Zhe Li (CHN) in Friday’s quarterfinals.

Li won an exciting encounter against Bumpei Sato (JPN), during which Sato served for the first set at 5-4 before Li was spurred on by the home crowd, breaking back and clinching the first set in a tiebreak. Li broke early in the second set and eventually triumphed 7-6(4) 6-4.

Chang reached a career high ranking of 82nd in 2010 and is currently on the road back after an injury lay off.

The match was punctuated by a rain delay at 6-5 in the third set with the match needing to be moved to centre court for completion. Fujiwara maintained her composure though winning the required 12th game to seal victory.