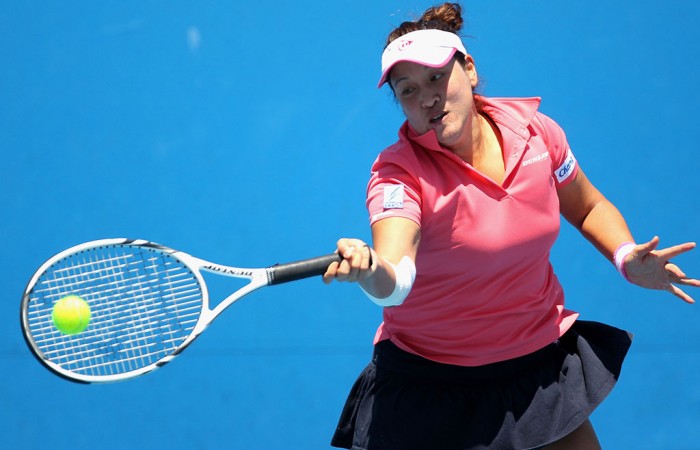 The start of the main draw at the Australian Open 2015 Asia-Pacific Wildcard Play-off (AWP) was highlighted by the defeat of both top seeds in the singles event.

Tanasugarn was clinical in the 6-4 6-0 demolition which lasted just over an hour, and will next face Nao Hibino (JPN) on Friday. Hibino defeated Yan Wang (CHN) 6-3 6-1.

Zhu was joined in defeat by men’s top seed Hiroki Moriya (JPN); he was shocked by Indian qualifier Purav Raja.

Breaks went back and forth in the opening set before Raja emphatically clinched the tiebreak. He secured an early break in the second set before closing out a 7-6(3) 6-4 victory.

Wu trailed a set and a break before rallying to win the match, and has now won nine consecutive singles matches at the AWP event since 2012.

Top ranked Chinese male Ze Zhang opened his campaign with a comfortable 6-2 6-3 victory over Chuhan Wang (CHN). Zhang will be looking to go one better in 2013 after being defeated in the 2013 AWP final. Zhang ultimately qualified for the Australian Open after battling through qualifying in January.

Bhambri knows the importance of the AWP event after winning the doubles title in 2013, and will be looking to add the singles title here to a growing list of tennis achievements which includes taking out the junior boys singles at the Australian Open in 2009.

In other women’s results, fourth seed Miharu Imanishi (JPN) opened her campaign with a 6-4 6-3 victory over 2012 AWP champion Yuxuan Zhang (CHN), and will take on rising Chinese star Shilin Xu.

Xu and Imanishi will play in the quarterfinals on Friday.

For draws, scores and player information, check out our dedicated guide to the Australian Open Asia-Pacific Wildcard Play-off.