Americans Jarmere Jenkins and Bradley Klahn will meet in the final of the 2014 Latrobe Valley Traralgon ATP Challenger after each were victorious in rain-affected semifinals on Sunday. 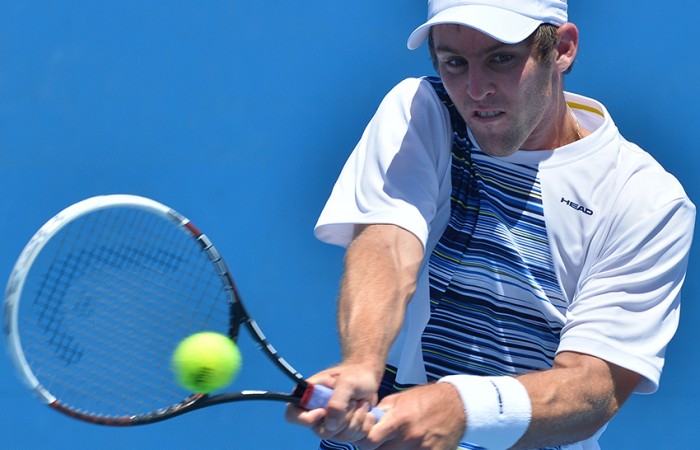 Americans Jarmere Jenkins and Bradley Klahn will meet in the final of the 2014 Latrobe Valley Traralgon ATP Challenger after each were victorious in rain-affected semifinals on Sunday.

With the matches already moved from Saturday after the day’s play was cancelled due to poor weather, sporadic showers continued to fall in Traralgon throughout the morning and into the early afternoon.

As such, it was a stop-start affair in the first match between local hope John-Patrick Smith and second seed, Klahn. Smith jumped out to an early lead before play was halted, but on resumption was able to close out the first set.

From that point on though, Klahn wrested back control and despite numerous stoppages and a match that took over four hours to complete, he was able to see the Australian off in a tightly fought contest 2-6 6-4 7-5.

Klahn now has the opportunity to go one better than his runner-up performance in Traralgon last year.

The second match pitted the in-form yet unseeded Jenkins against the third seed from Japan, Hiroki Moriya, who defeated the American in their only ever meeting earlier this year.

However, Jenkins was able to exact his revenge on Sunday and was never troubled, rushing to book his place in the final alongside his countryman 6-2 6-1.

“It was pretty good tennis from me,” Jenkins said afterwards.

“I figured out the wind pretty early and things just worked out from there.”

Things have been “working out” for Jenkins since his arrival in Australia, taking out the Cairns and Toowoomba titles last month and sending the top seed Go Soeda packing in the opening round this week.

Crediting his success in Australia to “putting in the hard work, and just being patient until it pays off”, Jenkins said his time here “is an opportunity to get away from the US and experience new players and a new environment”.

Serving for the match, the American let a number of consecutive match points slip away. After hitting his chair, he double faulted before realising he was bleeding quite profusely from a cut on his wrist. With the third set now level at 5-5, Jenkins received a medical timeout. Upon return, he quickly closed out the final two games and the match.

“It was one of those freak accidents,” Jenkins said.

“But it was unfortunate for [Kokkinakis] because it really slowed his momentum down.”

Jenkins said the injury gave him no hindrance in his semifinal match on Sunday.

Turning to Monday’s final, Jenkins and Klahn, both born in 1990, have known each other since they were 11 years old as a result of playing junior tennis side-by-side in the USTA system.

“We grew up together,” Jenkins said. “So we’re pretty familiar with how each other play.”

While the ATP rankings suggest Klahn is the clear favourite – he is well over 100 places higher than his opponent at World No.124 – the two haven’t met on the professional tour since 2010 and are locked at two wins apiece.

“Yeah, we haven’t played in a while,” said Jenkins. “It should be fun.”