UPDATE: Sam Stosur has kicked off her title defence at the Japan Women’s Open in style and will next meet in-form compatriot Jarmila Gajdosova. 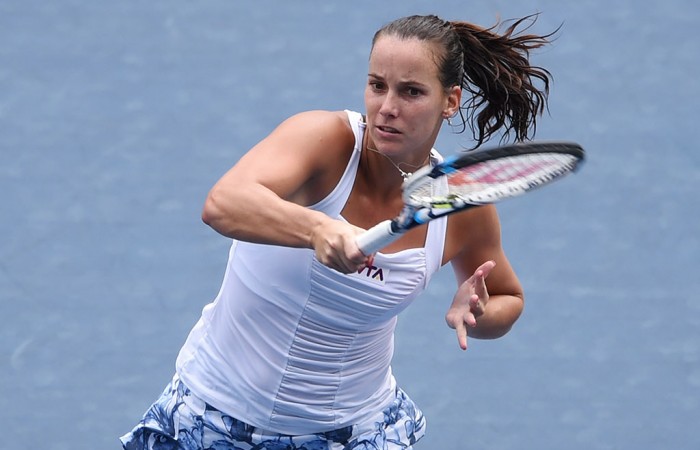 Sam Stosur has kicked off her title defence at the Japan Women’s Open in style with a straight-sets win over Japan’s Misa Eguchi.

In the second round she will face fellow Australian Jarmila Gajdosova, who earlier on Tuesday overcame Japanese lucky loser Miharu Imanishi 6-4 6-0.

Gajdosova served six aces en route to the the 59-minute victory, and takes a 2-0 head-to-head record into her match against Stosur.

The world No.68 has won both their previous meetings – at Eastbourne in 2006 and Brisbane in 2011 – in straight sets.

Scores were level throughout the first set until the top seed snared a break in the 10th game to pocket the opening set.

Stosur immediately went down a break in the second set, but from 2-4 reeled off three straight games to turn the match back in her favour.

With Eguchi serving at 5-6, the Japanese player raced to a 40-15 lead and looked set to send the set to a tiebreak.

She finished the match with an impressive 83 per cent success rate on first serve points.

Tomljanovic moves on in Tianjin

Over in China, Ajla Tomljanovic has progressed to the second round of the WTA International event in Tianjin.

The naturalised Australian recovered to beat Ukrainian qualifier Nadiia Kichenok 5-7 6-1 6-2, setting up a second round meeting with China’s Ying-Ying Duan.

Another Aussie, Anastasia Rodionova, fell 6-1 6-1 in the first round to Su-Wei Hsieh of Taiwan.