Nick Kyrgios admits he's now more aware of the pressures that come with being billed as the hottest prospect in men's tennis as he gears up for the US Open. 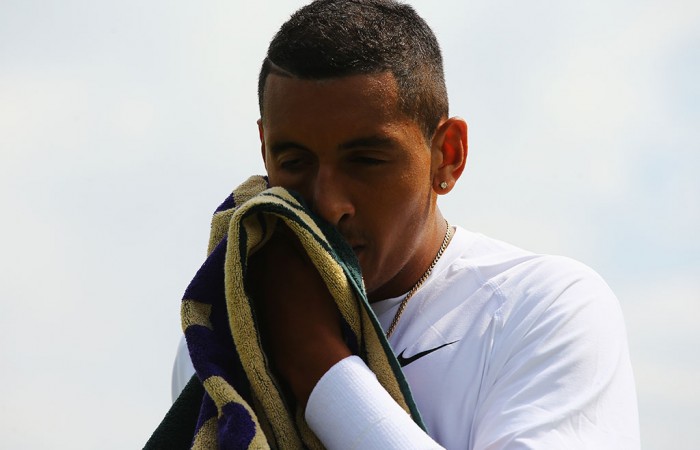 Nick Kyrgios admits he’s feeling the pressure that comes with being billed as the hottest prospect in men’s tennis.

The Australian teenage sensation launches his US Open bid on Monday (US time) still trying to accept the newfound fame that followed his Wimbledon slaying of world No.1 Rafael Nadal.

Ranked 840th before winning last year’s Australian Open junior crown, Kyrgios has rocketed to 59th in the world and has sponsors clamouring to have the 19-year-old endorse everything from underwear to, of course, tennis racquets and shoes.

The young man in no great hurry says, despite his unflinching belief and on-court showmanship, the burden of expectation isn’t so easy.

“It does weigh on me a lot actually sometimes,” Kyrgios told AAP ahead of his first-round clash with Mikhail Youzhny.

“It’s all happened really quickly for me. It’s sunk in a little bit but, at the same time, I think about it a lot still.

“Last year I was playing Futures and now I’m playing Grand Slams. It’s crazy. Seeing guys that you watch on TV and you just walk around the locker room and you’re potentially playing them, it’s pretty daunting at times.”

With a strong team and tight family for support, Kyrgios thinks he’s coping well but still sometimes wishes he could escape the glare.

Right now, though, as the year’s final Grand Slam event is about to commence, he knows that’s impossible.

He’ll be the first Australian in action on Day 1 at Flushing Meadows, up against a two-time US Open semifinalist who last year rallied from 5-2 down in the fifth set to deny Kyrgios’s Davis Cup teammate Lleyton Hewitt a spot in the last eight.

> Aussies in action: US Open Day 1

“It’s going to be an awesome match,” Kyrgios said.

“He’s one of the better players that’s been on tour for a long time. He’s so consistent and making quarterfinals here last year, he obviously plays his best at the US Open.

“So I’m going to go out there and have fun. It’s another Grand Slam, it’s what you play for.”

Despite being less than 100 per cent due to lingering left arm injury, Kyrgios gives himself a shot of upsetting the 21st seed.

But it won’t be the end of the world if the former top-ranked junior can’t spring another boilover at a major.

“Having a junior transition into the seniors doesn’t happen very often just because of the weight of all that expectation,” Kyrgios said.

“You’ve just got to stay patient and obviously the No.1 juniors do something right. They’ve obviously got the game. It just takes a bit of time.

“Definitely I’ve still got a long, long way to go to do what I want to do in this sport and what I want to achieve. So I’m bracing myself for the times when it’s going to be tough.”

Matt Ebden, who faces German Tobias Kamke, and Anastasia Rodionova, up against Italian Camila Giorgi, are the only other two Australians on show on Monday.