Doubles legend Todd Woodbridge dissects the form and the hopes of the Australian contingent heading into next week's US Open, the year's final Grand Slam tournament. 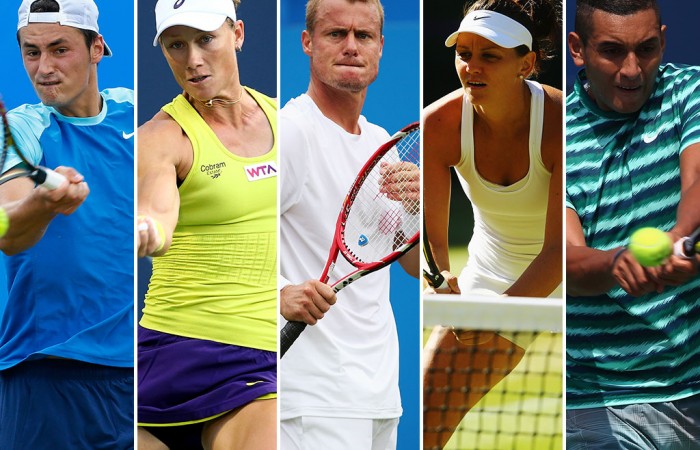 “After Wimbledon I think he did the right thing by coming back (to Australia) and resting and sort of soaking up everything that happened during that Wimbledon period. He went to the States and won a round at a Masters Series (in Cincinnati) which is another first for him which is fantastic … I think with Nick, we’ve seen it already, he does have an ability to just come out at a tournament and win straight up. And there’s only one other player I’ve seen be able to do that in Australian tennis, and that’s Lleyton Hewitt … I think he’s got enough enperience there to once again make another breakthrough at Grand Slam level.

“(The surface) suits him well. I think almost his best surface is a medium to fast hard court, and that’s what the US Open is …he gets a lot out of the court with his serve, and his forehand in particular really picks up speed off that court. We saw the damage he was able to do at Wimbledon against Nadal with that, and I think he’ll go into (the tournament) pretty confident.

“One of things his team would have been talking a lot about is how to handle that new expectation. So much more media attention on him … I think he’ll really need to have a plan in place to be mentally prepared for that. I know he puts that sort of pressure on himself and expectations of playing well in big matches. But I think he can handle that as well.

“You go from being a hunter to being the hunted. And once that happens it’s a whole different scenario. The rest of the tour has also watched him now – they’ll have video footage of him, they know how he plays, they know the strengths and weaknesses and they’ll start to go into matches with him with a better game plan.”

“I think Bernard’s tracking pretty well. At Wimbledon he played some pretty good tennis considering the amount of tennis he’d had (following double-hip surgery). I think the last couple of weeks you would have liked to see him win more matches to go into the Open to (be able to) say, yes, he’s got a great chance. I think he’s got to go in looking at the Open with (the attitude of) ‘I have something to prove at Grand Slam level’. He has not played, I think, his best tennis at the US Open. And I think the US Open is a good surface for him. He won the juniors there, he likes hard court, he can anticipate well on that court. I think it’s time for him to step it up at the US Open.”

“Sam’s in an interesting part in her career. I think she’s hitting the ball as well as she’s ever hit the ball, but is at a really low ebb in terms of confidence. She’s had a bit of a coaching change, she’s got Simon Rea who’s been with her the last few weeks and he’s a great workhorse; he’ll have her out there doing all the things she likes to do in terms of practice and being well prepared. She’s just got to get the momentum running if she can. She had a great match against Serena (in Cincinnati); showed that she’s actually close and needs to believe in herself just at those crucial moments.

“I think she was due for a (coaching) change when she left Dave Taylor. (With) Miles Maclagan, that just didn’t quite work out. But as you get to your 30s in this sport, you’re pretty well set in terms of what you do. You’re not going to be improving that much of your shot-making because you can’t do that much in that part of your career. What you need to do is prepare, get confident and win matches. I think with a guy like Simon, he loves fitness, he loves getting out on court and they’ll do a lot of drilling, and that’s when Sam plays her best tennis. That’s what she did a lot of with Dave Taylor; they really worked out a lot of patterns of play, then they went out an executed it in matches. I think that’s what she’s looking for, is to be able to play a certain style and keep to it.

“What we’ve watched (with Sam) over the last year has been a little sporadic; it’s shot-making without patience. And I think if she can build the patience back into the heaviness of the serve and the big forehand, then she’s going to play well.”

“Lleyton loves those challenges (of the US Open). He loves that gritty, noisy, determined atmosphere and the energy that the US Open brings … He loves what he’s doing and he loves competing. I think we’re seeing a little more erratic results from him week in, week out; where it used to be always so solid, we’re seeing one good week and then one tough week to back it up. That tends to be what happens in your 30s. Your body doesn’t recover; even if you feel you’re hitting the ball well, you don’t get the same result. He hasn’t played well in the last four or five majors, and I think he really lives for those, so I’d expect if he doesn’t put too much pressure on himself in that way, then he’ll do well.”

“I think she’d rather be in better form going into the US Open (her loss in the first round at New Haven was her third straight). There was probably going to be a lull that came along, because she’s had such a great year, she’s been winning matches week in week out, (reaching) semis and all new experiences for her, and mentally when you haven’t done that throughout your career, it’s hard to maintain that.

“She’s also got the doubles there, Ash (Barty) has gone over. I know that that is a good vibe too. And Ash hasn’t been over there (to the US yet). I think for the two of them, they work in tandem pretty well. I think that lifts Casey quite a lot – she likes, whether she knows it or not, to play that mentoring role, and I think that helps her own tennis.”