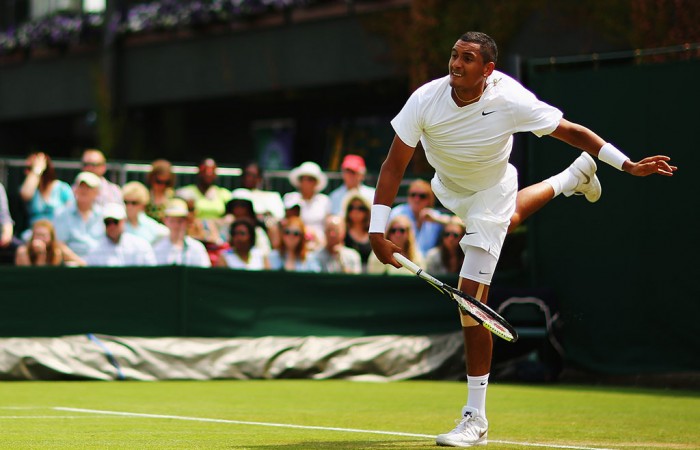 “After (losing) the third set it could have got a bit interesting, getting broken at the start of the fourth but I thought I stayed composed.”

Having appeared in the main draw at the three other majors, Kyrgios completed the set by earning a wildcard berth at Wimbledon on the back of his title win in last week’s Challenger event in Nottingham.

The world No.144 feels grass could be his best surface and Kyrgios looked right at home on the famed lawns on Tuesday, firing 29 aces and aided by 17 double faults from Robert.

Both he and the 78th-ranked Frenchman served strongly in the first set but the Australian always appeared in control and dominated the tie break.

The teenager was asked more questions on serve in the second set but constantly had the answers; he fired eight aces and again the tiebreak was one-way traffic.

Both men lost their rhythm on serve in the third set, trading breaks early.

Kyrgios saved two set points before losing the third set tiebreaker but he cruised to victory against a tiring Robert in the fourth.

The Australian was ranked outside the world’s top 800 early last year but has shot to a career-high mark thanks to three Challenger titles this year and Grand Slam match wins at last year’s French Open and this year’s Australian Open.

Already the youngest man inside the world’s top 150, he will push closer towards the top 100 following Tuesday’s win.