Perhaps even more heart-warming than seeing three Aussies qualify at Wimbledon was the large contingent of their compatriots supporting them at Roehampton. 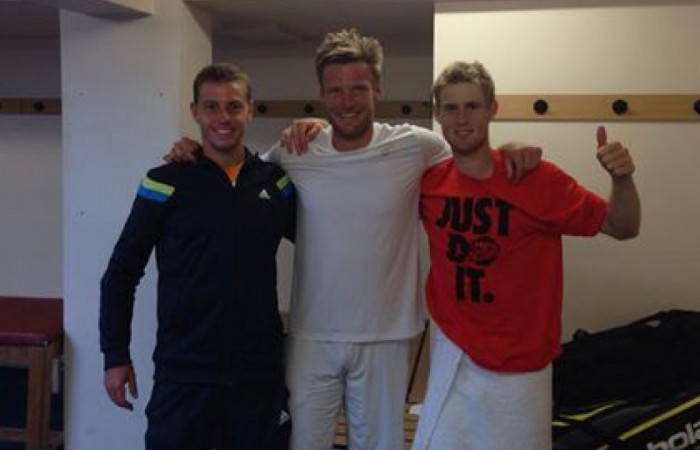 Perhaps even more heart-warming than seeing three Australians come through qualifying at Wimbledon was the large contingent of their compatriots supporting them at Roehampton.

On Thursday, Sam Groth, Luke Saville and James Duckworth were cheered from the sidelines by several current and former Australian players including Lleyton Hewitt, Nick Kyrgios, Chris Guccione, Peter Luzcak, Josh Eagle and Tony Roche, as well as a host of junior talents.

Groth made note of that support after beating Simone Bolelli in four sets to successfully qualify for a Grand Slam event for the first time.

“It’s unbelievable to see Kyrgios out here today, Lleyton out here, Rochey out here, Looch (Peter Luczak) out here, all the Tennis Australia crew out here,” he said.

“I feel like that’s massive; it’s a very tough sport to get there on your own, and that support, having all the Aussie guys out here, hopefully we can keep pushing each other to greater heights.”

Groth said that at 26, he was the oldest member of a new wave of emerging young talent that included Duckworth, Saville, Kyrgios, Kokkinakis and Alex Bolt, who reached the final round of Wimbledon qualifying in what was a career-best performance at a major for the 21-year-old.

And he felt that the new generation, including himself, could look to the current crop of Aussies at the top of the game and draw valuable inspiration.

“I want to make this my career. I don’t want to be floating around 130, 150 (in the rankings). I want to do a Marinko (Matosevic) – I guess what he’s been able to do over the last few years, he’s entrenched himself in that top 100 and made a real go of things,” Groth said.

Saville enjoyed huge support from the Aussie troupe in his final round qualifying match, helping him secure a dramatic four-hour victory of Yann Marti that extended to 8-6 in the fifth set.

The South Australian believed his good form in 2014 was linked to the fact that he had a settled team of Aussies around him.

“Grant Doyle is my one-on-one coach, really enjoying his work at the moment. Daniel Buberis usually works with me in the strength and conditioning department but this week (at qualifying) there’s Aaron Kellett; Ian Prangley has been here doing the physio treatments,” he said.

Australia will field its largest men’s contingent – eight players – at Wimbledon since 2000.