Bernard Tomic has returned to the ATP winners' circle with a first-round victory at Queen's Club in London, while fellow Aussie James Duckworth also advanced. 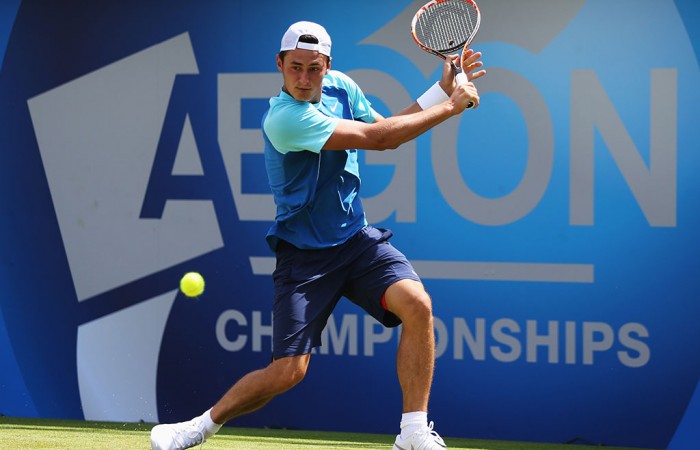 Bernard Tomic has returned to the ATP winners’ circle for the first time in almost five months with a first-round victory at Queen’s Club in London.

Tomic opened his grass court campaign with a 6-4 3-6 7-5 win over American Tim Smyczek on Monday, his first victory in a main draw match since reaching January’s ATP final in Sydney.

He was joined in the second round at the ATP 250 event by fellow Australian James Duckworth, the qualifier rallying to beat Israeli Dudi Sela 0-6 7-6(5) 6-4.

Tomic, who reached the last 16 at Wimbledon last year, has struggled to regain his form following two bouts of hip surgery in February, with his ranking plummeting to No.82.

The 21-year-old was easily beaten by Frenchman Richard Gasquet in the first round of last month’s French Open but he hoped a return to his favourite surface would yield improved results.

A match-up against 106th-ranked Smyczek always looked a favourable one but Tomic was far from convincing and forced to dig deep late in a rollercoaster match.

Tomic made a steady start in hot conditions on a sunny London day, securing the first break of the match to go 4-3 up and fending off two break points to serve out the first set in 28 minutes.

Tomic was broken in the fourth game of the second set and Smyczek held on to square up the match.

The Australian was serving well early in the third set but he appeared to become unsettled after taking issue with a line-call.

Smycek broke to go 5-4 up and serve for the match but Tomic won 11 of the next 12 points to secure victory in one hour and 33 minutes.