Sam Stosur will enter her third round French Open match against Slovakian ninth seed Dominika Cibulkova with the confidence from having won all four of their career meetings. 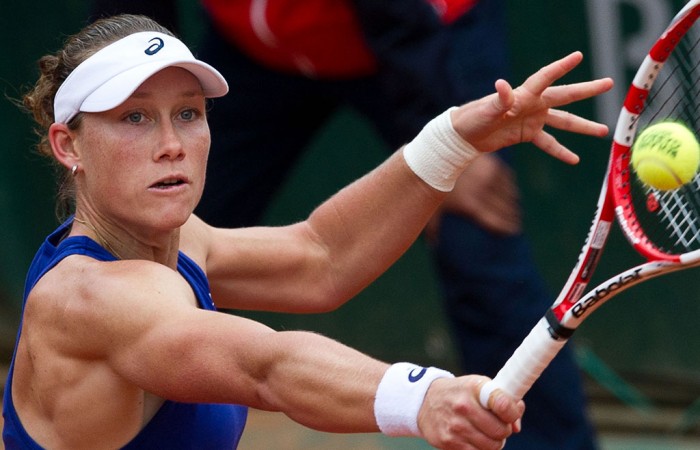 Sam Stosur may still hit a tennis ball “like a man” but Dominika Cibulkova now plays and thinks like a Grand Slam finalist.

Slovakian Cibulkova famously compared the Australian’s awesome service and top-spin capabilities to those of a male at the French Open two years ago.

“She played unbelievably … She played like a man and it’s really hard to play against a man,” Cibulkova said, in a complimentary manner, after her 6-4 6-1 quarterfinal loss in 2012.

The pair meet again at Roland Garros on Friday in a third-round encounter scheduled first up on Court Suzanne Lenglen and Stosur’s power has again been causing her opponents headaches on the red clay.

Cibulkova has not beaten Stosur in four attempts but the Australian Open runner-up feels, this time, things can be different.

And 19th seed Stosur admits she has to expect a backlash from the ever-improving world No.10.

“I know when I’ve never beaten somebody you certainly go out there wanting to win,” Stosur said after her 6-1 6-3 second-round win over Austrian Yvonne Meusburger.

“If you have lost four matches, maybe it’s time to try something different. So I will certainly have to be aware of what she’s going to come out and try and do and really be smart at the start.”

As well as now being a top 10 player, 25-year-old Cibulkova heads into the pair’s latest duel firmly established on the Grand Slam stage after finishing runner-up to Li Na at this year’s Australian Open.

“I’m feeling it’s a little bit of a different story this year,” Cibulkova said after a 6-3 6-4 second-round win over Austrian Tamira Paszek.

“She’s also a human, so I know what I have to do better against her.

“After getting into the top 10 this year and having a great result I’m feeling that if I’m playing my best tennis, I can beat anybody.

“She’s a tough opponent for me but I think one day I feel like I have to beat her.”

Despite Cibulkova’s undoubted improvement, Stosur is buoyed by the fact the most recent victory against the Slovakian came only earlier this month on clay.

Stosur trailed 4-0 in the first set at the Madrid Masters before blowing Cibulkova away 6-4 6-0 and she acknowledged it gave her a mental edge.

“I’ll certainly know that I was able to do that,” Stosur said.