Aussies in action: Stosur back on Day 4

Sam Stosur feels her persistence through 2014 form struggles could be paying off ahead of her second round match at Roland Garros against Austrian Yvonne Meusburger. 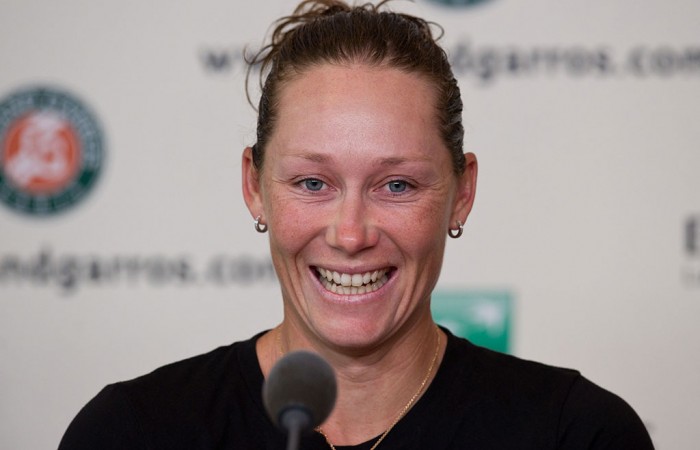 Sam Stosur has endured enough frustration of late to know she can’t take anything for granted at the French Open.

But the Australian 19th seed believes her persistence through 2014 form struggles could be paying off heading into her second round match against Austrian Yvonne Meusburger on Wednesday.

A ruthless and efficient Stosur produced her best performance of the season to thump Puerto Rican Monica Puig 6-1 6-1 in the first round at Roland Garros on Monday.

On that form she will be heavily favoured to also see off world No.38 Meusburger, a fellow 30-year-old with a 7-19 Grand Slam win-loss record.

But Stosur, understandably, is treading cautiously.

“I’m not going to take anything lightly,” Stosur said.

“She (Meusburger) has been a pretty solid 30-40 ranked player for quite a while now. I don’t know too much about her. We’ve practised together one time in Miami this year.

“I’m just going to try and focus on my tennis, play aggressive and do what I know I can do well.”

After failing to string together back-to-back WTA wins for almost four months after reaching the third round of the Australian Open, Stosur felt she turned a corner with a handful of encouraging performances at recent claycourt events in Madrid and Rome.

When times were tough, Stosur resisted making any radical changes to her training regime under new coach Miles Maclagan.

“You’ve got to stay positive and keep practising and keep doing the things that you know work for you,” Stosur, who has a 16-12 record this season, said.

“I guess that’s what I’ve been able to do a little bit better the last few weeks and why I felt more comfortable.

“I enjoy playing here. I feel comfortable on these courts so walking out there, you feel good.”