Australian No.1 Sam Stosur will meet German No.2 Andrea Petkovic in the first rubber of this weekend's Fed Cup World Group semifinal in Brisbane. 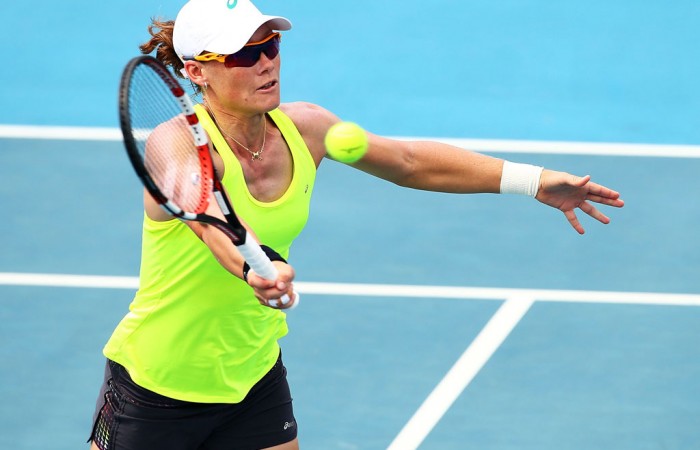 Australia’s No.1 Sam Stosur will launch Australia’s campaign to reach its first Fed Cup final in 21 years on Saturday when she opens the tie against resurgent German Andrea Petkovic.

The host nation for this weekend’s semifinal has clinched eight of the two nations’ previous 12 encounters, including a comprehensive dismantling of a Petkovic-Kerber-led German team on clay in Stuttgart two years ago where Stosur upended both in straight sets.

The Aussie girls come off their best showing in the competition since reaching the same stage in 1993. It is the first time since 1994 the girls from Down Under have progressed beyond the first round of the World Group.

The semifinal drought for the once mighty Germans, has been almost as long; their last appearance at this stage coming 19 years ago.

The newly 30-year-old Aussie No.1 has bragging rights in the pair’s only previous match, having easily dismissed the shoe-shuffling Petkovic 6-4, 6-1 the last time the two nations met on an indoor clay court in Stuttgart. Stosur, though, has struggled for form in 2014 and has seen her ranking teetering on falling out of the top 20. Petkovic, herself a former top-10 player, is not at the level, which saw her reach the final at this venue at the Brisbane International three years ago. But she carries momentum, albeit from clay, having surprised the field to win in Charleston only a couple of weeks ago. Expect Petkovic to play well above what her current ranking of 28th would suggest.

Since reaching a surprise US Open semifinal as an unseeded player in 2011, Kerber has been a permanent fixture in the top 10. In a battle of the lefties, the 26-year-old claimed the pair’s only previous match in straight sets in a lowly qualifying event in Dallas three years ago. It’s a result that will count for little as both are playing substantially better than at that point in their careers. Dellacqua brings hardcourt form to the table having equaled a career-best grand slam result by reaching the fourth round in Melbourne to begin the year. She would go on to break through for her first Premier-level WTA Tour quarterfinal at Indian Wells just last month, winning six matches straight to come through qualifying and beating top-20 players Kirsten Flipkens and Roberta Vinci along the way. Kerber, though, has reached finals on hardcourts at the Premier-level event in Doha and earlier in the year in Sydney,;her most recent result, a run to the quarterfinals in Miami.

Australia’s 2011 US Open champion battled past a then-92nd-ranked Kerber en route to her grand slam breakthrough, with a three-set semifinal victory. Despite the loss it was a watershed result for the German lefty, who would go on to finish in the top 5 in 2012 and ninth last year. The world No.7 is expected to win both singles rubbers on paper this weekend and will draw confidence from Stosur’s less-than-impressive record against lefties and of the Aussie’s poor record on Pat Rafter Arena. Stosur, though, insists the team environment of playing for her country is a different kettle of fish to bearing the weight of expectation on the eve of the Australian Open and will favour her chances, having also won the pair’s second clash, a straight-sets thwarting in the aforementioned Fed Cup World Group play-off the last time the two teams met. This shapes as the pivotal match on Day 2.

The duo has never met and if this was played on clay, the German would start a strong favourite. On recent form, she will anyway. The decision to play the tie on a hardcourt in the midst of the claycourt swing, hinges largely on Dellacqua’s credentials on the surface, so expect the West Australian to come out swinging, determined to notch a singles win before having to back up for the doubles.

The 17-year-old Barty and her veteran doubles partner, Dellacqua, come off a remarkable 2013 in which they reached three of the four grand slam finals –the Australian Open, Wimbledon and the US Open – to finish the year in the top 10.  While their results as a team in 2014 haven’t continued in quite the same vein, they will have their work cut out against the German pairing. Groenefeld is a Fed Cup veteran of 11 years and has teamed with Goerges in her past four doubles events to gain valuable match play. Barty would relish the chance to play a live doubles rubber before her home crowd if it were to come down to it.

Tickets are available now through Ticketek or you can watch the tie on Fox Sports.