Sam Stosur and Casey Dellacqua have both been dealt tough draws at the Sony Open in Miami. 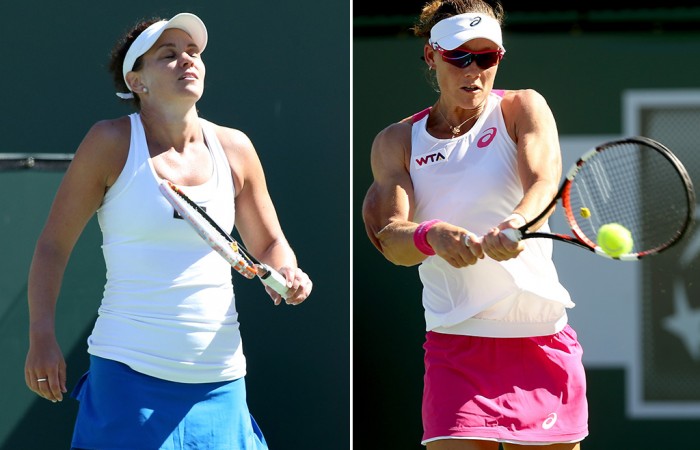 Sam Stosur and Casey Dellacqua have both been dealt tough draws at the Sony Open in Miami.

Stosur is seeded 16th at the combined ATP/WTA event, and faces a projected fourth-round showing with top seed and world No.1 Serena Williams.

If she was to progress that far, Stosur would have had to beat Victoria Duval or a qualifier in the second round – the former her conqueror at the US Open in 2013 – and then win a likely third round battle with 21st seed Anastasia Pavlyuchenkova of Russia.

The last time Stosur played in Miami – which was in 2012, before she missed the 2013 edition due to a calf injury – she fell in the fourth round to Williams.

As a seeded player, the Queenslander receives a bye into round two.

Dellacqua, meanwhile, faces a potential rematch with Simona Halep, the rapidly-improving Romanian whom she fell to in the Indian Wells quarterfinals last week.

Halep, ranked fifth and seeded No.6, awaits the winner of the match between Dellacqua and Switzerland’s Stefanie Voegele.

Dellacqua, who has risen to world No.56 following her stunning run at Indian Wells, has been awarded a wildcard into the US$11 million tournament.

Another Aussie, Naiktha Bains, will attempt to join Stosur and Dellacqua in the main draw by way of qualifying.

The men’s draw ceremony has yet to be conducted.