The RSY Royals are the Asia-Pacific League (ATL) Champions for 2014. 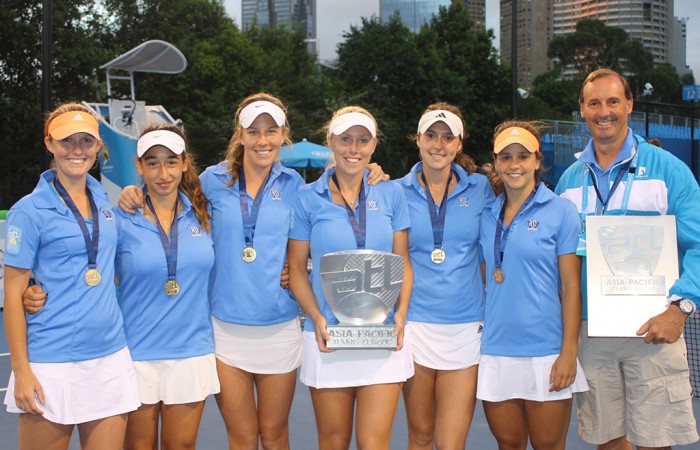 The RSY Royals are the Asia-Pacific League (ATL) Champions for 2014.

In a hard fought out battle the RSY Royals proved too strong for the Flagstaff Freighters from South Australia winning 4 rubbers to 2.

Olivia Rogowska got the Royals off to a flying start winning her match over Magda Linette (POL), a wildcard entry for the Freighters. Tammi Patterson had a tough battle with Jessica Moore proving too strong in their rubber leveling the scores 1-1.

Storm Sanders came out on top over Viktorija Rajicic taking the lead to 2-1 with Azra Hadzic left in the final singles rubber. Her match against Karolina Wlodarczak was an epic battle with Hadzic taking the first set 4-0. Wlodarczak wasn’t going to take defeat easily though taking the next set just as smoothly causing a tie break. Both players fought hard with Hadzic coming out on top to take the Royals to a 3-1 lead.

Going into the doubles all looked to be heading the Royals’ way until the doubles combination of Patterson/Harris was defeated leaving all pressure on Rogowska and Sanders. Taking the first set it the Royals were making a charge until the Freighters fought back and took the second set.

The tiebreak was off to a quick start with the Royals quickly stretching out to a 5-1 lead. With the trophy within their grasp they edged further forward leading 8-3 until the Freighters’ fought back to get the scores to 9-9. The crowd was on their feet cheering for both teams in this strongly contested battle. The strength of the RSY Royals serve was too strong, taking the next two points and the championship.

Speaking after the match Tammi Patterson, Captain of the RSY Royals, said “We all know each other’s games, we all get along well and we know that we can all rely on each other to get across the line. We’ll keep the winning team together for next year. I’m proud of the girls and that we got through it.”

The RSY Royals are the second Victorian team to take out a title of the expanded ATL after the Liston Seagulls won the men’s competition last year.