Seven Australians including Samantha Stosur, Casey Dellacqua and Ashleigh Barty are in action on day one of the 2014 Australian Open today at Melbourne Park. 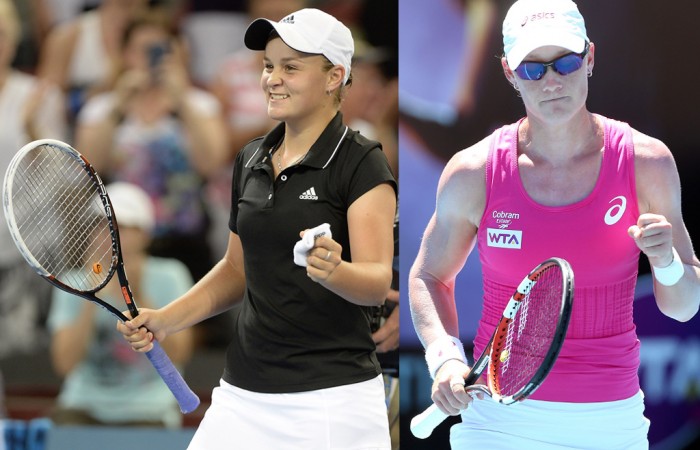 Seven Australians are in action on day one of the 2014 Australian Open today at Melbourne Park.

The septet of Aussies features No.17 seed Samantha Stosur who will take on Czech Klara Zakopalova on Rod Laver Arena. It will be a rematch of their semifinal clash in Hobart last week which Zakopalova won.  It will also be the third time that they have met in the first round of the Australian Open. Stosur has a positive 3-2 win record over the world No.32 and will be keen to avenge her loss from last week on the big stage.

The action on Rod Laver Arena will kick off at 11am with Australia’s Jarmila Gajdosova going up against German Angelique Kerber with Stosur’s clash with Zakopalova the third match of the day.

The night session will see 17-year-old Ashleigh Barty take on world No.1 Serena Williams in the second match on court.

Promising teenager Jordan Thompson will play the last match on Hisense Arena when he goes head-to-head with Polish twentieth seed Jerzy Janowicz. The match will not start before 5pm.

Show Court 2 features a double delight of Aussie action. Matthew Ebden will meet Nicolas Mahut from France in the second match of the day while the big serving Sam Groth takes on Canadian No.28 seed Vasek Pospisil in the third match.

Casey Dellacqua will be the highlight on Show Court 3 when she comes up against Russia’s Vera Zvonareva in match two.