Japan's Kei Nishikori has joined his coach Michael Chang on the honour roll at Kooyong after shocking world No.7 Tomas Berdych to win the AAMI Classic. 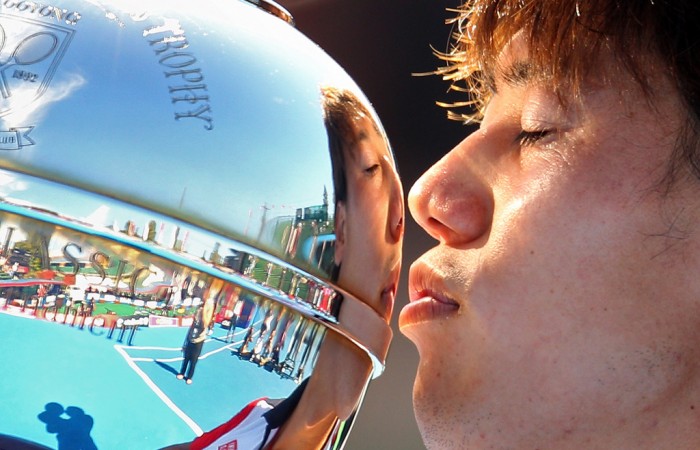 Japan’s Kei Nishikori has joined his coach Michael Chang in illustrious company on the honour roll at Kooyong after upsetting world No.7 Tomas Berdych to win the AAMI Classic.

Nishikori, the 16th seed at next week’s Australian Open, overcame the rangy Czech to take the title 6-4 7-5.

He was watched in the stands by former French Open champion Chang, a three-time winner at the famed Melbourne venue from 1995-97, while other previous winners include Pete Sampras and Andre Agassi.

It continued a promising start to the year for the 24-year-old who was eliminated in the Brisbane International semi-finals by Lleyton Hewitt.

The match appeared headed into a third set but Nishikori saved two break points at 5-5 and then broke Berdych to wrap up the title with a searing cross-court backhand.

Drawn to face local hope Marinko Matosevic in round one of the Australian Open, Nishikori said his preparation had been ideal.

“I’m very happy with the way I played as there was not many unforced errors and I was aggressive and tried to step inside the baseline and it was working well,” he said.

“It won’t be an easy first match (against Matosevic) and it’s not easy to play an Australian but if I can play like I did today I have a big chance to win.”

Berdych, who will play Kazahkstan’s world No.92 Aleksandr Nedovyesov in his opening round at Melbourne park, wasn’t too bothered by the result.

“I didn’t come here for focusing on the score but more on the game that I played and today was in some stages a better game.

“It was about finding my rhythm and being comfortable, moving quite well and my body is prepared and feeling good.”

But for the exhibition tournament being a fluid eight-man invitational field Berdych should have been declared the winner by default.

He beat Nishikori 6-4 6-1 in the semi-final but the other two semi-finalists Richard Gasquet and Gilles Simon both withdrew with injury.

“Probably for the final it could be that I should be the winner but it’s the set-up of the tournament and all players are trying to get prepared to feel good for Monday,” he said.