The stunning rise of 18-year-old Nick Kyrgios in 2013 has lead to his nomination for the prestigious Newcombe Medal. 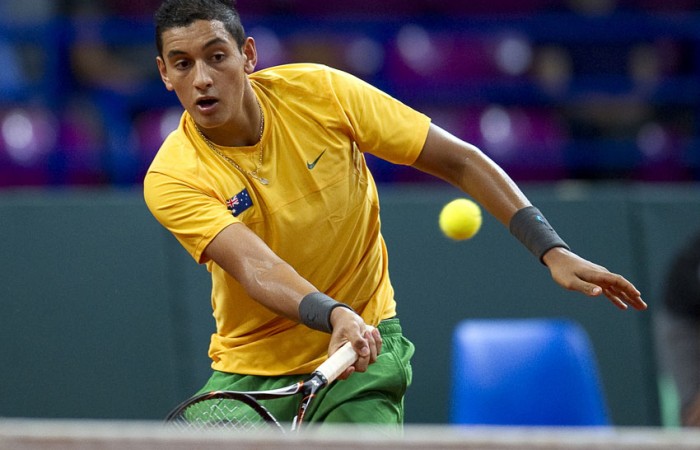 And it’s for good reason. A rising star of Australian men’s tennis, the 18-year-old from Canberra has been a revelation in 2013, slashing his ranking from No.843 in early February to its current mark of No.183, becoming the youngest player in the world’s top 200.

As a result, he will go up against veteran Lleyton Hewitt, established star Bernard Tomic, another veteran in Sam Stosur, and the formidable doubles duo of Casey Dellacqua and Ash Barty as a nominee for the Newcombe Medal.

He may not be the youngest player in that esteemed group – that honour goes to Barty – but he’s certainly the youngest to be nominated for his singles exploits.

> Newks: the stunning season of Barty and Dellacqua

Kyrgios’ rapid rise has been made possible by winning his first professional title – he captured the ATP Challenger crown in Sydney in late February – as well as a Futures title in China. And more impressively, he won his first ever Grand Slam match by defeating top 50 star Radek Stepanek at Roland Garros, and qualified for the US Open later in the year.

He iced his season by being selected in Australia’s Davis Cup squad for its World Group Play-off tie against Poland, and made a fabulous debut in the live doubles rubber; partnering Chris Guccione, he went down in five tough sets to the vastly more experienced Polish duo of Mariusz Fyrstenberg and Marcin Matkowski.

Such a composed performance drew praise from captain Pat Rafter, who signalled a bright future for the big-serving right-hander.

How does Kyrgios himself assess the incredible gains of the past season?

“Playing Davis Cup as well, obviously in my 18th year, was a great achievement. That’s something definitely that’s going to go down in history. Nobody can take that away and something I want to do in the future for a long time coming.”

If that’s the case, Kyrgios is sure to be nominated for many more Newcombe Medals in the future.

He may not be the hot favourite to take out Australian tennis’s highest honour this year, but the powerful baseliner has seen his chances to come home with an award increase following his nomination for the male Junior Athlete of the Year.

Regardless of the outcome of proceedings at Crown’s Palladium Ballroom in Melbourne, Kyrgios says he’s simply happy to be a part of the occasion.

“It’s obviously a great honour to be nominated for such an award (the Newcombe Medal). It’s going to be a pleasure being up there on that night with so many greats of Australian tennis as well. I’m excited for that night. It should be really good,” he said.

“Lleyton’s one of the best ever (players) to play the sport. Obviously Bernard Tomic as well, is one of the best up and comers that we’ve got as well. To be in the mix with those guys and to be sort of seen with them is a great honour and it’s an experience I’m sure I won’t forget for a while.”

Staying grounded in the present and enjoying each experience as it comes is a mentality that has served Kyrgios well to this point of his burgeoning career.

And it seems set to continue – the 18-year-old displays a maturity beyond his years when it comes to assessing his future, and had this to say when asked about his goals for the upcoming season.

“I haven’t really been thinking too far ahead. I’m currently in my training block at the moment,” he put simply.

“Obviously Brisbane’s the next tournament and I’m just thinking about that.”