Newks: the stellar season of Barty and Dellacqua

Ash Barty and Casey Dellacqua’s sensational season has continued with their nomination for the 2013 Newcombe Medal. 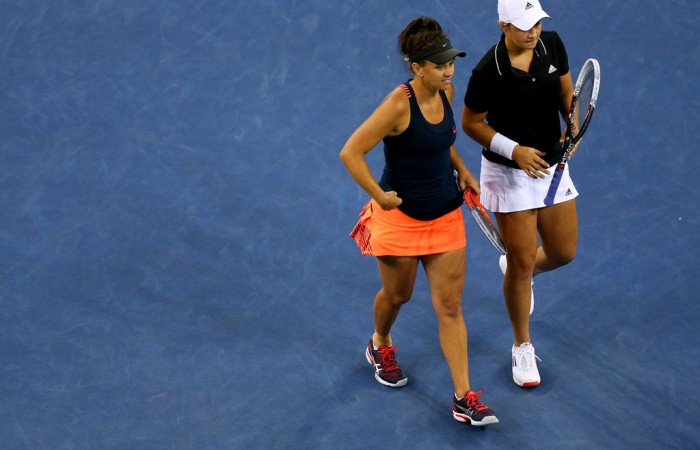 Ash Barty and Casey Dellacqua’s sensational season has continued with their nomination for the 2013 Newcombe Medal.

The award recognises the most outstanding elite Australian tennis player for the year, and the pair have been jointly nominated for their stunning exploits on the court this season.

Barty and Dellacqua made three trips to Grand Slam finals – at the Australian Open, Wimbledon and US Open – as well as collecting their first WTA doubles title as a team in Birmingham.

And despite playing just eight events together – partly due to the fact that the 17-year-old Barty has age-related tournament restrictions imposed on her by the WTA – they ended the season as the fifth-ranked doubles duo, just one spot away from qualifying for the prestigious WTA Championships in Istanbul.

Given they only teamed up for the first time in 2012, what has been the key to their success?

“We really enjoy playing with each other, we are a really good balanced team, we trust each other’s games,” Dellacqua explained recently to Australian Tennis Magazine.

“There’s a lot of factors but the majority of the time I think it’s the fact that we have fun, we don’t put pressure on ourselves and whatever the outcome, (we know) we’re out there doing our best.”

Throughout such a fabulous season, the pair’s only real regret was not being able to snare one of the big titles.

They came close in Australia, storming through the draw as a wildcard pairing and stretching top seeds Sara Errani and Roberta Vinci to three sets on Rod Laver Arena in the final.

At Flushing Meadows, they were mere points from victory before falling to Czech combo Andrea Hlavackova and Lucie Hradecka 6-7(4) 6-1 6-4, a team they’d beaten en route to the title match at Wimbledon. That one hurt.

“We’ve had a lot of success. Not today again, but we’ll get one one day, and it will feel good,” a dejected Dellacqua said at the US Open trophy presentation.

On the night of the Newcombe Medal, to be held on 2 December at Melbourne’s Crown Palladium Ballroom, Barty and Dellacqua will be up against fellow nominees Sam Stosur, Bernard Tomic, Lleyton Hewitt and Nick Kyrgios.

It’s an impressive list, but this duo of youth and experience own the season credentials to make a strong case for the award.

“It’s pretty unbelievable; this whole year’s been amazing,” reflected Barty, who also won a Deadly Award for being the Indigenous sportswoman of the year and along with Dellacqua has been nominated for the WTA Doubles Team of the Year award.

“I remember our first round match at the Australian Open, I was so nervous, and just to win that match, I was over the moon.”

Winning the Newcombe medal would cap a remarkable year for this popular partnership, and show just how far they’ve come since that first match of 2013.