Bernard Tomic knows winning the Newcombe Medal will be a tough ask, but a season full of career highs can only help his chances. 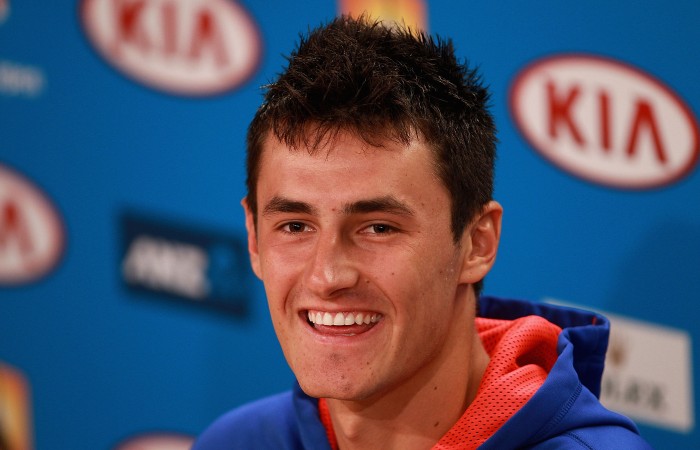 Bernard Tomic knows that winning the Newcombe Medal will be a tough proposition.

The 21-year-old is just one of among several deserving nominees, and his year was topsy-turvy to say the least; he mixed stunning highs with lengthy losing streaks, which saw his ranking hover around the No.50 mark for the second straight year.

But regardless of the outcome of the awards night on Monday, Tomic is thrilled to be considered for Australian tennis’s highest accolade.

“It’s a very very good feeling (to be nominated). What an honour to get that opportunity. I haven’t won the medal yet, so who knows?” he said.

“There’s some tough contenders there; Lleyton’s there, Sam’s there, Casey and Ash (too) so it’s going to be difficult (to win). I obviously played up-and-down this year, I’ve had some really good results and some bad ones, so who knows, we’ll wait and see.”

> Newks: the stellar season of Barty and Dellacqua

Those bad results Tomic refers to are 13 opening round losses from 25 tournaments in 2013.

But the season also provided some career highs for Australia’s No.1; he won his first ever ATP title in Sydney in January, part of a 10-match winning streak he built to open the season that eventually ended at the hands of Roger Federer in the third round of the Australian Open.

Tomic was devastatingly good in Davis Cup play, winning all four of his live rubbers – for the loss of just one set – and clinching the rubber in Poland that elevated Australia to the World Group for the first time in six years.

He also thrived, once again, at Wimbledon, dismantling No.9 seed Richard Gasquet in a Centre Court masterpiece on his way to the fourth round.

“I look at it as a good year, because I obviously won my first title this year in Sydney, and went on to get Australia back in the World Group which was very big for us in Davis Cup, so overall I think it went OK,” Tomic said.

“There were a lot of ups and downs, could have asked for a lot of things to be better, but I’m happy in the end result, I think.”

After years splitting his time between the Gold Coast and his European base in Monte Carlo, Tomic has recently enjoyed a change of scenery, with his family relocating to Melbourne.

Although done principally to further the career development of younger sister Sara, the move has also benefitted Bernard. He is now enjoying access on a regular basis to Melbourne Park’s state-of-the-art training facilities at the home of the Australian Open, a tournament during which he has historically thrived.

“Melbourne’s obviously totally different, it’s a Grand Slam, the first Grand Slam of the year, and it’s probably one Grand Slam I want to win in the future out of them all, and it’s huge. The feeling’s different to any other tournament and I enjoy playing here a lot, I’ve played some of my best tennis here as well.

“I can only look forward to 2014 and the Australian Open. I’ve got to play well, train well, and who knows what can happen.”

One thing’s for certain – the confidence that would come with being honoured as a Newcombe Medallist can only help his game heading into the new year’s first major event.