She may not have enjoyed the highs of her past three seasons, but a strong finish to 2013 has thrust Sam Stosur into contention for a fourth straight Newcombe Medal. 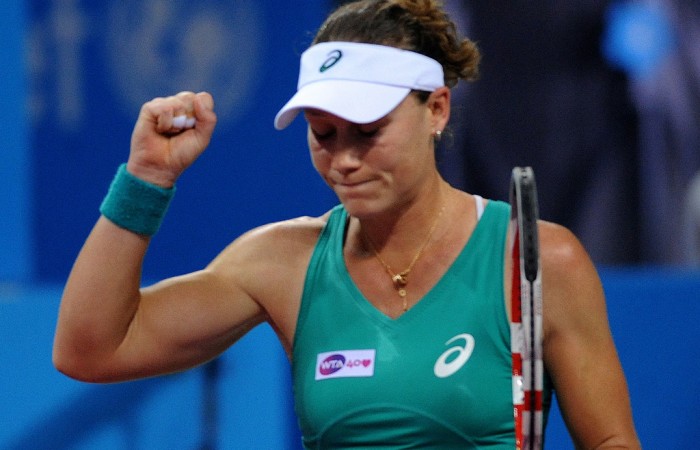 She may not have experienced the highs of her previous three seasons, but finishing 2013 with a flourish has filled Sam Stosur with confidence ahead of a new season during which she aims to return to the top.

It’s also thrust her into contention for a fourth straight Newcombe Medal, an award that honours the most outstanding elite Australian tennis player for the year.

One of six nominees for the prestigious medal, Stosur went on a tear following the US Open, winning her second Osaka title (her first came in 2009) and reaching the finals of subsequent tournaments in Moscow and the WTA Tournament of Champions in Sofia. As a result, she finished the season having won 12 of her past 15 matches and feeling a whole lot better about her game following a frustrating year.

“There’s definitely positives,” Stosur surmised in an interview with tennis.com.au.

“I’d looked at the year as a whole and thought it hadn’t been great, my ranking’s dropped, didn’t perform that great in the Grand Slams, especially the ones where I felt like I could’ve had a better showing. But it was my best Wimbledon, the most comfortable I’ve ever felt playing there … I beat (Victoria) Azarenka and (Petra) Kvitova for the first time this year, and certain things I felt were going along quite well and then I guess at the end of the year that boosted everything by winning another title and making some more finals.”

Indeed, prior to that purple patch in October, it hadn’t been quite as smooth sailing for Australia’s No.1.

She was unable to pass the third round at any Grand Slam event in 2013, and saw her ranking slip from inside the top 10 to No.20, her lowest mark in more than four years. There were some defeats that were tough to stomach – most notably against Zheng Jie at the Australian Open and Victoria Duval at Flushing Meadows – and a niggling calf injury robbed her of both momentum and preparation ahead of her favoured claycourt season.

But separating from long-time coach David Taylor in August seemed to breathe new life into the Queenslander. Playing relaxed tennis and cutting herself some slack during what was unfamiliar career territory by travelling solo, the wins flowed.

And while many of her contemporaries were flagging at the end of a gruelling season, Stosur’s motivation was as high as ever.

“I was definitely looking forward to a break, I was ready to go home probably a week or two before I ended up getting home (laughter),” she said. “But the last trip of four to five weeks were really good results, so that easily keeps you motivated to want to keep playing.

“I think next year there’s a huge chance for me to do better in the bigger events because it seems like the Grand Slams and a couple of the mandatory events was where I didn’t play well and didn’t get a result. So next year if I can turn that around in a few of those then I definitely think I’ll be feeling a lot better about my year (2014) as a whole.”

Despite the year being less successful when compared to Stosur’s stellar efforts from 2010 to 2012, many other players would certainly be happy with equivalent results. The 29-year-old reached four WTA finals – winning two, the most she’s ever won in a single season – and won 42 matches, one of the most satisfying coming in straight sets in the final of Carlsbad against the dominant Azarenka, against whom she’d previously been 0-8.

And so to the Newcombe Medal, where she has come away from the glittering awards night as the winner of the biggest prize for the past three years.

She’ll be up against tough competition in the form of Lleyton Hewitt, Bernard Tomic, Nick Kyrgios and doubles duo Ash Barty and Casey Dellacqua, but Stosur is the Aussie No.1 for a reason, and presents a strong case for recognition yet again in the awarding of Australia’s highest tennis honour.