A mix of rising stars and Aussie tennis icons will line up for the Asia Pacific Tennis League (ATL) when action gets under way around the country this week. Over the coming four weeks, 26 men’s and 27 women’s teams playing across five conferences will battle it out for their chance to contest the ATL Play-offs at Melbourne Park during Australian… 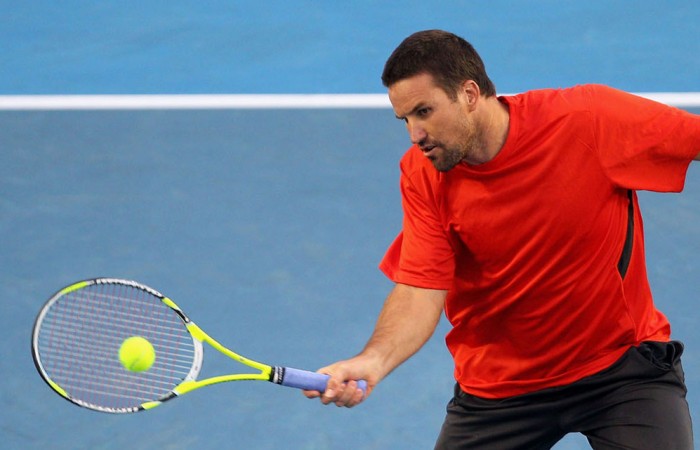 A mix of rising stars and Aussie tennis icons will line up for the Asia Pacific Tennis League (ATL) when action gets under way around the country this week.
Over the coming four weeks, 26 men’s and 27 women’s teams playing across five conferences will battle it out for their chance to contest the ATL Play-offs at Melbourne Park during Australian Open 2014.

Headlining the action will be two-time Grand Slam champion Patrick Rafter, who is scheduled to line up for the Sunshine Coast Breakers (Qld) at Kawana Tennis Club in a one-off appearance this Sunday 10 November.

Rafter, the dual US Open champion and captain of Australia’s Davis Cup team, will return to the court for a rare hit-out since retiring from the ATP Tour in 2002.

He will be joined throughout the ATL season by a raft of famous faces including Wally Masur and Sandon Stolle, who will line up for the Stanmore Wyverns (NSW/ACT), Peter Luczak for the MCC Stars (Vic) and Richard Fromberg for the Tennis World Taipans (Vic).

In the women’s competition, Casey Dellacqua is set to appear for Stanmore Wyverns (NSW) to round out a successful year on tour.

“The new ATL season is shaping up as a very exciting four weeks of tennis,” Hearne said.

“All 53 teams entered in the league are very strong, competitive sides, with a real chance at earning a place in the season-ending play-offs at Melbourne Park in January.

“We’re certainly excited to see Aussie tennis favourites including Pat Rafter and Casey Dellacqua hit the court throughout the season, and their involvement in the league really does reflect the calibre of this competition.

“Pat Rafter joining the Sunshine Coast Breakers is a real coup for the ATL. Pat is one of Australia’s biggest supporters of team tennis, and his profile has brought a real buzz to the Queensland Conference, which shapes up as one of the most competitive ATL Conferences.

“It’s also great to see some of the country’s most exciting rising stars hit the court, including Nick Kyrgios, Thanasi Kokkinakis and Olivia Rogowska. The mix of youth and experience that is represented across all 53 teams is sure to provide some outstanding tennis over the coming weeks, and we encourage all tennis fans to get behind their local team and support the competition.”

Now in its second season, the ATL is a unique and fast-paced competition that features four-game sets, no-ad scoring, no service lets and a range of other innovative concepts designed to make all matches exciting for players and fans. The league comprises five Australian conferences – South Australia, Western Australia, Victoria, New South Wales and Queensland – each offering both a men’s and women’s competition.

Hearne said the ATL was designed to offer quality competition to the nation’s top tennis players in an exciting, spectator-friendly format.

“The ATL is deliberately timed after the ATP and WTA seasons have finished for most players, to ensure players are back home in Australia and have the opportunity to re-engage with their local tennis clubs, centres and communities in a fun and competitive team tennis environment,” he said.

“It was really important when developing the match format that we found the balance between providing good competition while keeping it spectator friendly in terms of duration, innovation and excitement.”

The winning team from each conference will be joined at the ATL Play-offs in January by wildcard entrants from New Zealand, the Pacific-Oceania region, Korea and Japan for a share of $110,000 in prize money.

The 2013 ATL season gets under way in New South Wales today. Competition commences in South Australia on Thursday, Queensland and Western Australia on Friday, and Victoria on Sunday.

Stay up to date with all the latest news and results via Twitter using #ATLTennis.