Top seed Matthew Ebden has overcome a series of tough challenges to win the singles title on Sunday at the Victorian Tennis International ATP Challenger event. 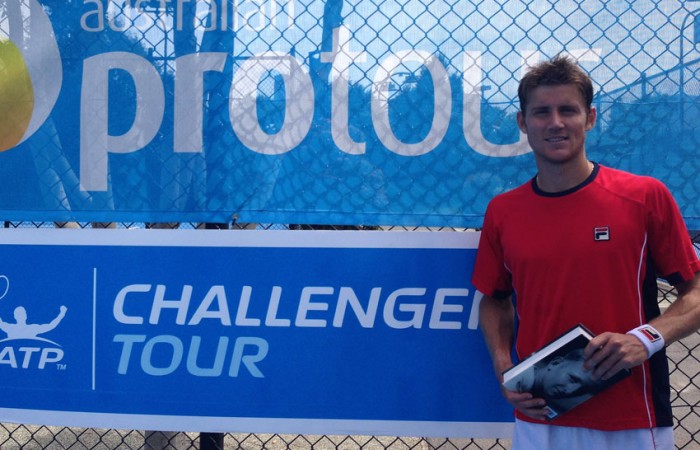 And it was made an even better day for Australia when Ebden’s compatriots Ben Mitchell and Thanasi Kokkinakis took out the doubles title.

In sunny conditions on final’s day at Melbourne Park, Ebden proved too strong for the sixth seeded Tatsuma Ito of Japan, winning 6-3 5-7 6-3.

It was an especially important win given it has seen the 25-year-old return to the top 100; Ebden vaulted 11 places this week to world No.98.

After winning the first set in less than half an hour, Ebden starting strongly in the second set and moved to a 3-0 lead, only for the 191st-ranked Ito to fight back and take the second 7-5.

Yet it was all Ebden in the final set; he cruised to victory in just shy of two hours.

The Western Australian Ebden had done it the hard way throughout the $50,000 Pro Tour tournament, dropping sets in four out of his five matches on his way to victory.

“I toughed it out a bit during the week, so I had to find some good tennis,” Ebden reflected.

“The fact that they’re building some Challengers into the schedule is only going to help a lot of Australians. Its just amazing to be able to play here in Melbourne.

“I’ll take a lot of confidence from it. I’ll try to finish the year really strong and setup for next year.”

On his way to the final Ebden had to overcome some quality opposition from Australia and abroad in the form of Japan’s Yasutaka Uchiyama, rising local stars Thanasi Kokkinakis and Blake Mott, and eighth seed James Ward from Great Britain.

In the doubles decider it was the wildcard pairing of Kokkinakis and Mitchell who captured the title, defeating compatriots Alex Bolt and Andrew Whittington 6-3 6-2 in just over an hour.

It was the pairing’s first Challenger doubles title together.

“We’ve struck up a really good combination and we’re playing really good doubles,” they said after the match.