Aussies off to a flyer in World Junior Tennis Finals

Australia’s boys’ and girls’ teams have begun brightly at the World Junior Tennis Finals in the Czech Republic, both winning their opening round-robin matches. 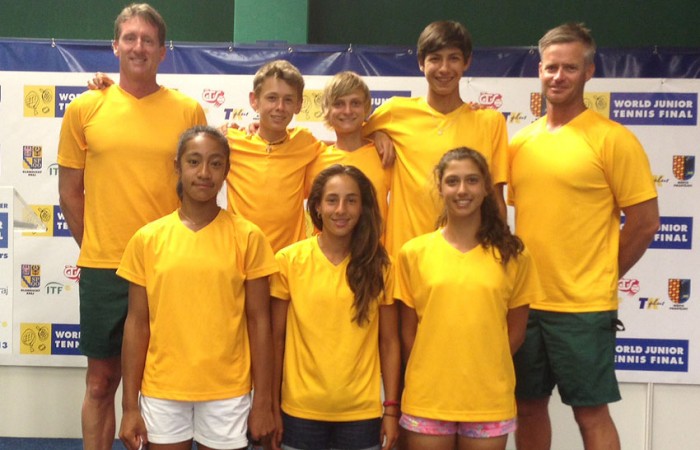 Australia’s boys’ and girls’ teams have begun brightly at the World Junior Tennis Finals in the Czech Republic, both winning their opening round-robin matches.

The boys’ team of Alexei Popyrin, Alex De Minaur and Kody Pearson beat the host nation two rubbers to one, with De Minaur winning his singles match and Popyrin and Pearson combining for victory in the decisive doubles match after Popyrin fell in three sets in his singles match.

Pearson told tennis.com.au that a training block in Munich prior to the WJT finals was excellent preparation for the ITF 14-and-under event.

“We had all the resources there [including] four clay courts, indoor courts, athletic facilities, swimming pool, plus [captain] Ben Pyne and [physical performance coach] Rudy [Sopko],” he explained.

“[We] had a tough battle [against the Czechs] in the live doubles but staying strong after splitting the singles.”

Aiava and Mendez both won their singles rubbers in straight sets before Aiava combined with Fourlis to cap the whitewash with a straight-set win in doubles.

“[It] was the perfect start for us,” observed team captain Simon Youl.

“The singles matches were very tight and hard-fought, which will help the girls immensely going into their next matches.”

Australia’s boys’ and girls’ teams will both face Italy in their next round-robin matches.