Nothing generates confidence better than a couple of wins on the match court, which is exactly what Chris Guccione has found lately on the ATP Tour. 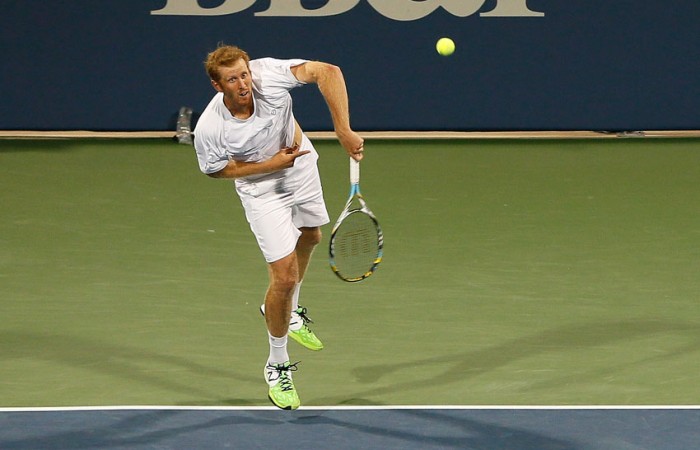 Nothing generates confidence better than a couple of wins on the match court.

And that’s exactly what Chris Guccione has found since his excellent result at the ATP Claro Open Colombia just over a fortnight ago.

The big-serving left-hander from Victoria was ranked as high No.67 in 2008, before a combination of Achilles and toe injuries – and subsequent loss of form – saw him slide down the rankings, causing him to fall outside the top 600 late last year.

But Guccione appears to be on the way back up. And it was his impressive run in Colombia that sparked a revival.

A new ATP event in 2013, the tournament is held in the high-altitude city of Bogota, contributing to fast conditions that assist the 28-year-old’s ceaselessly-attacking game.

It showed in his results – Guccione won two matches in qualifying to progress to the main draw, and won his first ATP main draw match in two years over Evgeny Korolev, who retired from their match after Guccione claimed the first set. In round two, the Victorian almost claimed the scalp of world No.96 Santiago Giraldo before falling in three tight sets.

“Just getting a few matches under my belt I think,” he told tennis.com.au over the phone from Canada, where this week he’s entered into the Vancouver Challenger doubles draw with fellow Aussie Matt Reid.

“I hadn’t played a lot of singles for quite a while and going down to Colombia winning a few matches there [helped with] just getting a bit of confidence. Obviously some altitude down there helps my serve a bit and the other guys don’t really like it as much.”

Jumping from 510th to 401st in the world thanks to that impressive result, Guccione continued his winning ways in Atlanta last week, winning another two matches in qualifying before falling at the final hurdle to 117th-ranked compatriot Matthew Ebden in two tight sets.

While his recent singles success has been encouraging, Guccione is nevertheless focusing predominantly on doubles.

He’s currently ranked No.94 in the tandem discipline and continues to enjoy a thriving partnership with Lleyton Hewitt; the pair progressed to the semifinals in Atlanta and have won all five of their Davis Cup doubles rubbers.

And while he’s focusing on a solid showing this week with Reid in Vancouver, singles, for the meantime, has been put on the backburner.

“[There’s] more of a focus on doubles because my Achilles tends to flare up every now and then when I play too much singles,” he revealed.

“But I’ll play singles where I can. And eventually if my singles ranking starts to climb to a point where I can focus on singles again, I will. But for the moment I’ll play predominantly doubles and just sign up for singles when I have the chance.”

If his results in Colombia and Atlanta – and the subsequent confidence they’ve generated – are anything to go by, those chances could come more frequently as the season progresses.