Speaking to the media at Melbourne Park, Todd Woodbridge gives his thoughts on how the Aussie players will fare when they arrive at Roland Garros. 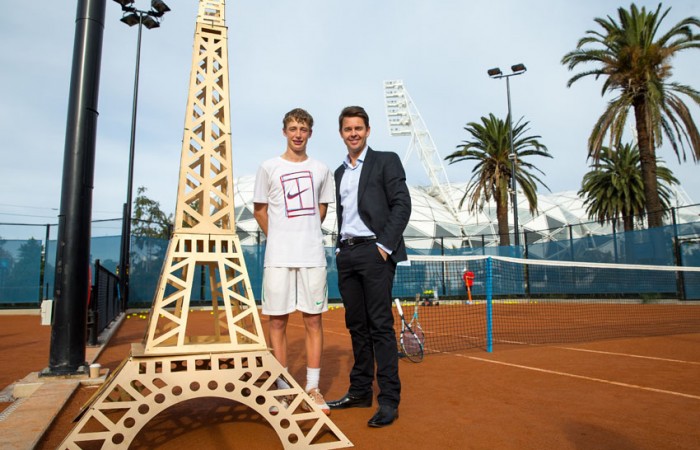 Clay might not typically be the surface that our players fare best on, but thanks to Sam Stosur’s recent success at the French Open, Australians have begun to take more and more notice when Roland Garros rolls around.

And it’s already underway – men’s qualifying has kicked off on the terre battue and the women will join in on Wednesday.

> read about the Aussie men’s results in qualifying

> see the preview of our women’s chances in qualifying

Main draw action begins this Sunday, and there are several Aussies in the draw who will be itching to take on the world’s best at the game’s biggest claycourt event.

Chief among them is Stosur, a player who has reached at least the semifinals three times in the past four years, and went all the way to the final in 2010.

According to Tennis Australia’s professional tennis manager Todd Woodbridge, the world No.9 is one of a select few who have a realistic shot at hoisting the silverware in Paris, despite a season plagued by injury.

“I think the quarters [would be] a very solid result. And if she can get there, that’s when she becomes dangerous. That’s when she starts to scare the opposition, because that’s usually when the serve and forehand are going well. We’ve seen her beat Serena there, we’ve seen her have some great runs. It’s all about the momentum,” Woodbridge said.

“She’s been striking the ball well, she’s actually looking fit and relaxed. But she is the sort of player who needs a lot of matches under her belt and plays with momentum. She has had a stop-start season.

“Last  week in Rome was a really good result, a couple of solid wins. [She] almost took out [Victoria] Azarenka who is probably her worst [opponent] on tour … So if the draw is kind to her, she can get into the tournament, and then get one of the top players that she does play well against, she can still be in a semifinal or even win a major again.

“She’s certainly in the top four players to walk away with that championship in my view.”

Stosur will be joined in the women’s draw by compatriot Ash Barty, with the 17-year-old scoring a prized wildcard into the event.

The Queenslander, who lost to then-No.4 seed Petra Kvitova in the opening round in Paris 12 months ago, has come along in leaps and bounds during that time, and Woodbridge believes she’s poised for a big result.

“Ash is on a very steady rise to the top in my view,” he said.

“If she can get a decent draw, she will win a round, and she’s certainly very close to knocking off some of the big guns in women’s tennis. She beat [Francesca] Schiavone in the Hopman Cup, took a set of [Dominika] Cibulkova at the Australian Open. She can really go well.”

Another Aussie young gun at the French Open inspiring excitement is 18-year-old Nick Kyrgios, also the beneficiary of a main draw wildcard.

The Canberra native will be playing the main draw of a Grand Slam tournament for the first time in his career, and thanks to his recent meteoric rise in the rankings and extraordinary success in transitioning from the junior to professional circuits, Woodbridge believes he’s thoroughly deserving of the opportunity.

“He’s a great talent to watch … and he’s got a bit of spark about him,” Woodbridge commented.

“He’s got a big game – big serve, big forehand, he’s not scared and he loves the occasion. So I’m very excited to see how he does. I don’t expect him to do super well; this is the experience that he needs to start to believe that he can play at that level.”

Woodbridge said it was encouraging to receive news from Tomic’s camp that the Australian No.1 – still just 20 years of age – would contest the French Open.

“I think it’s very important that he plays there. Whether he has a good result of not is probably unlikely given the surface and the circumstances but he needs to keep playing coming into the grasscourt season – that’s where he’s played some great tennis before,” Woodbridge said.

“If you don’t get that little bit of match play and you’re not around the scene, it’s hard to get the momentum going, so the fact that he’s going to be in Paris for me is fantastic.”

The French Open main draw commences on Sunday 26 May.

For more information, check out our dedicated guide to Roland Garros 2013.