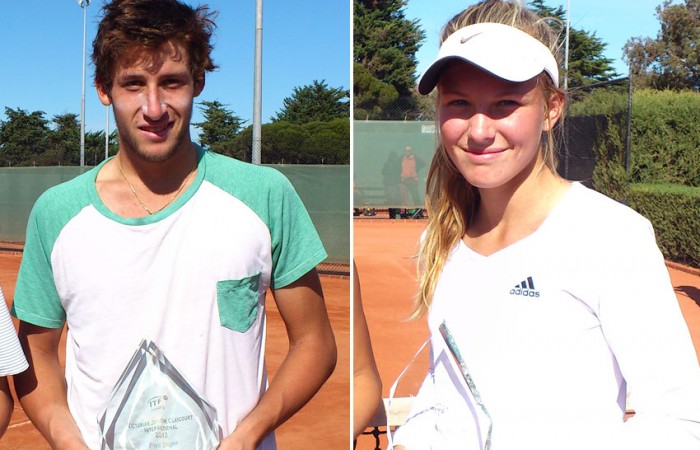 Inglis, currently ranked 443rd on the ITF world junior rankings and 74th on the Australian Rankings, won the Grade 4 title 6-1 7-6(4) in one hour and 47 minutes, in her second career ITF junior final after reaching the decider of the Grade 3 New Zealand 18-and-under Summer Championships in Auckland in February.

“I am pretty happy, I have been working towards this for a while so it feels good to finally win a tournament,” said Inglis, who will move inside the Top 300 on the Junior ITF rankings after her victory today and also having reached the doubles final this week.

Having won all four of their previous encounters up until this week, Inglis went into the final full of confidence and showed it by breaking serve in the fourth and sixth games to take the opening set 6-1 in just over 40 minutes.

However, Bollweg, 14 and playing her first ITF junior final, was able to settle down at the beginning of the second set and turned the momentum her way by taking an early 2-0 lead.

In a set of ups and downs for both players, Inglis immediately broke back to level at 2-2 before Bollweg broke serve again to take a 4-2 lead.  Inglis wrenched back the momentum once more by breaking serve twice in the next three games to take a 5-4 lead and serve for the match.

But Bollweg wasn’t ready to lie down and levelled the set at 5-5 by breaking the Inglis serve to love and eventually forcing the set into a tiebreak.

Yet it was Inglis who was the more aggressive player on the bigger points and a well-placed serve out wide at 5-4 in the tiebreak set up two match points. She only needed one, as a Bollweg forehand flew wide to hand Inglis the title.

“Before the match, I knew I had to be mentally strong and with me and Sasha training all the time together, I kind of knew how to play her and what shots she would hit but it was a different match, but I think being mentally strong especially in the second set helped me win.”

Inglis will now move onto this week’s Gallipoli Youth Cup at Melbourne Park full of confidence before heading off to the United States in May with a few other Australians to play two ITF junior events and three $10,000 ITF Pro Circuit events.

“Finally, I have had a pretty good week and definitely going to take a lot of confidence out of this week, I have been a little down in confidence and in my play but I feel pretty good and looking forward to playing at the Gallipoli Youth Cup next week,” said Guccione, who will move inside the world’s top 175 when the updated ITF junior rankings are released.

Purcell, who reached the final of the 16-and-under National Claycourt Championships last week, was looking to go one better and started off the match by breaking the powerful Guccione serve to open up a 3-1 lead.

However, he was unable to keep up the high level of play and gave back the break of serve before Guccione was able to wrestle the final game of the set to take it 7-5.

The second set was a one-sided affair – Guccione broke Purcell in his first service game of the set and never looked back.

“Max played pretty well in that first set and unfortunately wasn’t able to keep it up in the second set but I think he had a bit of a shoulder injury, but I stayed strong and focused and managed to get through.”