In the rain-delayed ATL final of the NSW/ACT conference at Sydney Olympic Park Tennis Centre, it was the Sydney teams who came up trumps. 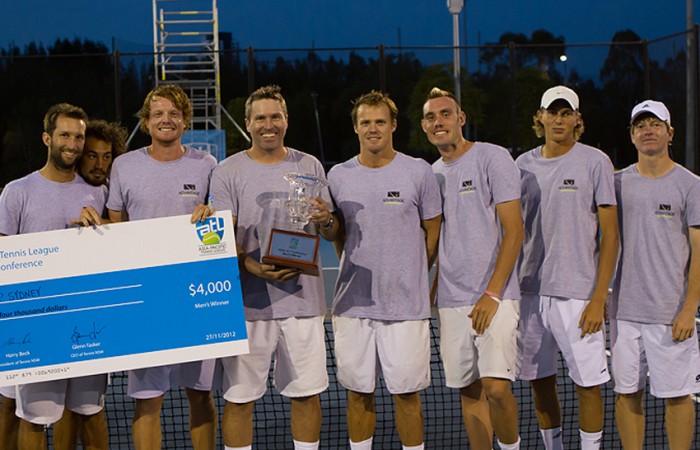 When the rain-suspended final of the Asia-Pacific Tennis League NSW/ACT conference got underway at Sydney Olympic Park Tennis Centre on Thursday night, it was the Sydney teams who made their move.

With both conference finals hanging in the balance before the rain set in on Tuesday night, there was a lot on the line for all teams.

The women’s final was a nail-biting and drama-filled affair with the Asia-Pacific Tennis Institute Steelers slightly ahead of Canberra Velocity 2-1 before the rain halted play.

The No.4 singles match was restarted as Canberra Velocity player Nicole Hoynaski was unable to come back Thursday night due to playing commitments overseas. Hoynaski was up 4-1 against Asia-Pacific Tennis Institute Steelers, Trudi Musgrave (Kotara, NSW).

The ATL commission made the decision that Canberra Velocity was able to substitute Hoynaski for another player in their line-up, with the match starting from scratch. Tarlina Tipungwuti stepped up for her team but was unable to match it against the experience of former WTA player Musgrave, with the Steelers taking the win 4-1 4-1.

In doubles, the partnership of Bengson and Adamzack defeated Keir and Tipungwati, winning a tense first set tie-breakbefore running away with the second set 4-0. Canberra Velocity’s Tyra Calderwood and Alison Bai prevailed in some great rallies in their thrilling win over Trudi Musgrave and Renee Beck, 4-1 3-4 10-5.

Asia-Pacific Tennis Institute Steelers manager, Chris Steel (Rockdale, NSW), was thrilled that his team was able to grab the win and secure their place to play in the finals during the second week of the Australian Open.

“There is nothing like winning, the girls had to fight hard in their matches tonight and I am very proud of each and every one of them,” he said.

“It’s another level again (ATL final in Melbourne). It’s all the teams that have won their conferences around Australia and its quite amazing the depth and talent the other teams have. As soon as we get there we have to hit the ground running and be in form from the first match.”

The men’s conference final was a one-sided affair with top of the ladder team, ATP Sydney defeating Canberra Velocity five rubbers to one. The ATP Sydney team were up 2-1 on Tuesday night, with Matt Barton (Collaroy, NSW) unable to capture a singles win against Nick Kygrios.

Ryan Henry (St Leonards, NSW) displayed some great tennis against Jake Eames in the second set tiebreaker. Switching up his serve, he fired a cross court ace to take the match 4-1 4-3.

“We hoped that Ryan would use his experience which he has gained over the years to get the job done, which he did. Going into the doubles we were pretty confident that Adam Feeney (Forresters Beach, NSW) and Ryan Henry would be tough to beat,” said ATP Sydney team manager, Luke Bourgeios (Wahroonga, NSW).

“It will be the first time that the guys have played the second week of the Aussie Open so it is a great chance for them to showcase their games and be involved. It’s been a great experience.”

Asia-Pacific Tennis Institute Steelers and ATP Sydney will make their way down to Melbourne for the ATL final during the second week of the Australian Open 2013.

They will be competing against teams from Western Australia, Queensland, South Australia, Victoria, Pacific Islands, Asia and New Zealand for the inaugural ATL title.