John Millman and Arina Rodionova have won the singles titles at the William Loud Bendigo International in Victoria as the Australian Pro Tour concludes for 2012. 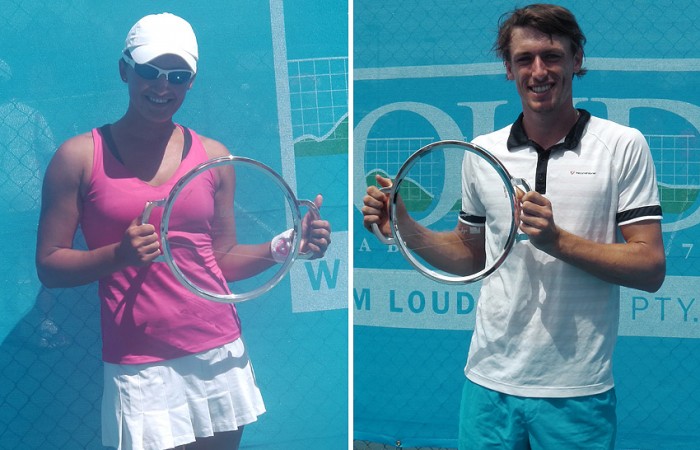 “It’s good to get a win. It’s a massive difference from making a final to getting the win in terms of how you feel about yourself,” Millman said.

“I’m really happy because I spent a lot of last year out on the sidelines. This year I’ve also made a final of a Pro Tour event in Bundaberg and then a final of a Challenger in Busan.”

Millman said he had to play with high intensity to get the win yesterday.

“I had a good win in the quarters where I managed to get my intensity back up there, that pushed me on in my semifinal match and I just managed to carry that bit of energy into the final,” he said.

Millman will return to Queensland to play in the Asia-Pacific Tennis League this week before heading to Japan for a couple of Challenger events in mid November.

Arina Rodionova also sealed her first singles title for the year when she defeated top seed and world No.108 Olivia Rogowska (St Kilda, Vic) 6-4 7-5 in the women’s singles final.

The No.7 seed has found some form heading into the Australian summer, having also finished as a finalist in Traralgon last week where she fell just short to Ashleigh Barty (Springfield, Qld).

“I’m really happy with the result but can’t wait to enjoy a few days off,” Rodionova said.

“I’m pleased with the way I’m playing because it’s been a really rough year. I got injured in April and had to sit out for a while.

“The last two weeks have been great to play so many matches. Finally I can say that I’m back to the way I was playing last year.”

Rogowska was up a break in the second set but Rodionova found a way to break back.

“It wasn’t a pretty match. We were both really tired, I played 7-6 yesterday against Ashleigh and Olivia had a lot of long matches this week too,” Rodionova said.

“We were fighting as hard as we could. Olivia was up 5-3 in the second set but I found a way to get back into it.”

The Australian Pro Tour will resume for a brand new season in late January 2013 for the McDonald’s Burnie International in Tasmania.