Friday 10 to 1: The toughest jobs in tennis

As the curtains begin to close on the 2012 tennis season, we count down the less desirable jobs on tour.

Laced with lucrative sponsorships, adoring fans and royal treatment in the world’s most luxurious locations, it’s no surprise that being a professional tennis player is highly decorated on the dream job list. But behind the glamour of the sport’s elite is a much longer list of the more demanding tenures, dealing with strict deadlines, bustling crowds, flying tennis balls and, occasionally, a player who has had a less than happy day at the office. As the curtains begin to close on the 2012 tennis season, we count down the less desirable jobs on tour.

TV commentating and presenting might seem like the next best thing in the tennis world, and has become a natural progression for retiring professionals. But, it’s not always as easy as it looks. Just ask Todd Woodbridge, who was confronted by Kim Clijsters in the middle of centre court regarding a certain text message he had sent to Rennae Stubbs …

Tennis fans and autograph hunters alike will do almost anything to catch a glimpse of their heroes, but unfortunately there’s never quite enough of our players to go around. In comes player security, tasked with the job of moulding the mob. At the 2010 BNP Paribas Open, watch as the security offers bustle Rafael Nadal through the screams and giant tennis balls that seem to be a part of his shadow. If the President is looking for some reliable security, he needn’t look further than these officials. 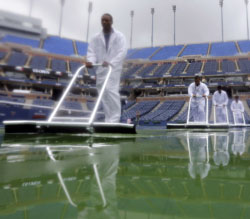 The 2012 US Open marked the fifth in as many years that the men’s final was pushed to Monday due to rain, so it’s understandable the next toughest job in our countdown goes to the US Open court dryers. Very few days went without rain in New York this year and with storm clouds rolling behind them, it often seemed like a futile 22-court workout. 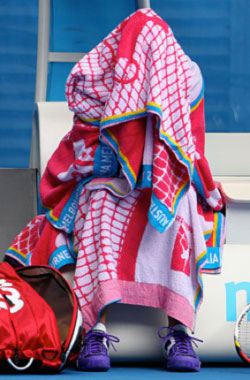 At all the Grand Slams we see hundreds of players towelling off between points, sets and during practice—often ritualistically. Imagine then the job of cleaning them. At the Australian Open, tournament washers collect 200 player laundry bags daily and 3000 bags over the course of the two weeks. An incredible 1500 towels are distributed into the cycle and reportedly at least 1000 of those end up in the crowd or stashed in players’ carry-on luggage. The job falls to the staff to ensure every court and every player has an abundance of fluffy, fresh towels—no matter how many towels they are left with. We just want to know what detergent they use.

Typically hailed the unsung—or unstrung—heroes of tennis tournaments are the stringers. During the US Open, the stringers typically string 3500 racquets, working to each player’s unique set of demands. Working tirelessly in one room with no exception from perfect, the job doesn’t come without the pressure of handling the players’ most important tools. During matches the stringers are under the pump to keep up with player demands, taking minutes to do a job it would take a novice up to an hour to complete—and not without a few cuts and scrapes.

While the players are unlikely to blame their stringer for a bad performance, the coaches at times face the full brunt of their player’s frustration. Faced with dagger stares, thrown racquets and now on-court coaching on the women’s tour, the player–coach relationship is definitely a delicate one. Travelling around the world, the coach is never off duty and the relationship gets even tougher when, like Li Na, your coach is also your husband.

Even closer to the action are the revered ballboys and ballgirls, who endure hours of training to master the art of controlling the balls during matches. Not only are the ballkids subjected to time pressure, torpedoing balls, and a peppering of sweaty towels under the burning sun, but the embarrassing consequences of their mistakes. We’ve all seen the dropped balls and stumbles, but perhaps the toughest moment in the job came at the 2011 French Open, when a trigger-happy ballboy had hands clasped over mouths around the world, costing Serbian Viktor Troicki a certain point against Andy Murray.

In tennis there isn’t anything much more important than the tennis court, and as far as tennis courts go, there are few more important than the grass courts of Wimbledon. So, naturally the third toughest job in tennis has to go to the one man responsible for it all. Eddie Seaward has been the head groundsman at the All England Club since 1991, leading the team curating the hallowed turf of Wimbledon and maintaining its dignity until the final ball. Most of us stop at mowing the lawn, but Seaward is stuck in a delicate balancing act to keep the courts at their best green and at a perfect 8 mm. Unfortunately for the ground staff, there isn’t really a tougher job than predicting English weather.

Coming in at number two are those in the definition of a hot seat—the umpires. Love it or hate it, player tirades at the man in the chair are one of the more talked about spectacles of the game, proved no more explicitly than John McEnroe’s long list of cameo performances with the line “You cannot be serious!” Given the ultimate governing power over the match, the umpire is responsible for every call in every point, and unlike the linespeople and ballkids, aren’t subbed every five games. While umpires do hold the power of a code violation, it offers them little self-defence against the verbal outburst of the more volatile players. It was definitely a tough day on the job for this umpire, copping a spray from Andy Roddick at Australian Open 2008.

Facing the same abusive rants with the greater threat of tennis-ball sized bruises, are the dutiful linespeople coming in at number one on tennis’s toughest jobs. While dealing with the pressure of calling a serve to pinpoint accuracy, linespeople not only have to make a call but dodge the ball rocketing towards them at over 200 km/h. But, they’re not always so lucky on the latter. At Wimbledon this year a lineswoman saw a Jo-Wilfred Tsonga ball right to the end, copping a nasty shot to the eye. But it was Serena Williams’ infamous exchange with a lineswoman at the 2009 US Open that really seals the deal. After watching that, it’s hard to deny our linespeople the title of toughest job in tennis.