UPDATE 2.50pm: Matthew Ebden has advanced to the second round of the US Open for the first time in his career, while Marinko Matosevic fell in five sets. 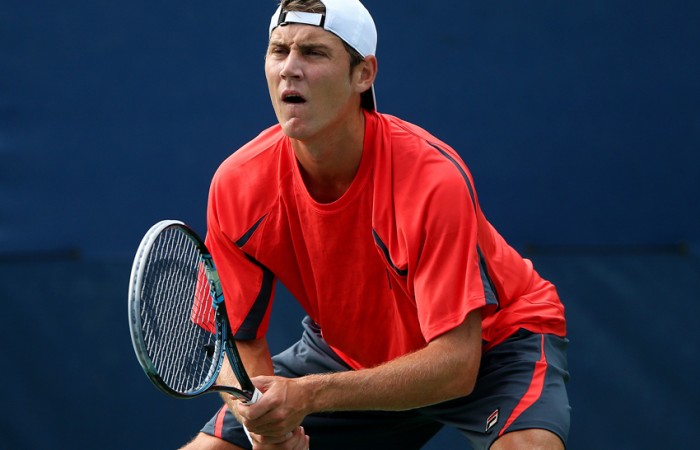 Matthew Ebden has joined Australia’s growing winning list on Day 1 of the 2012 US Open, beating Japan’s Tatsuma Ito to advance to the second round.

Ebden’s second round appearance has come after his first ever match in the singles main draw at the US Open.

“I’m just treating it like any other match really, and other five-set match, put it that way. I probably haven’t had that much experience with five-set matches … But I’ve gone alright in them. It’s a bit of a building phase for me, getting used to this level time and time again, and building wins in Grand Slams,” he said.

The world No.71 began brightly, jumping out to an early lead thanks to a break of serve. Yet he let Ito back into the match – soon the pair were embroiled in a tiebreak, and Ebden was staring down a set point at 6-7.

The 24-year-old remained steady, however, and eeked his way out of the precarious situation to eventually pocket the opening set after exactly one hour.

“I probably played a bit of a sloppy game (to drop serve) … I made OK plays and he came up with some winners and some great drop volleys and all sorts, and the tiebreaker was much of the same,” Ebden reflected.

“It was good quality that first set, and I think that set was key. It was very physical, it was a long set, and I was pretty confident after getting that one.”

From there, the Australian was a level above Ito, a friend and occasional practice partner. Ebden broke serve twice on his way to clinching a two-sets-to-love lead.

Watched on Court 14 by Australian Davis Cup captain Pat Rafter, head of professional tennis Todd Woodbridge and another former Aussie pro in Peter Luczak, the third set was tighter for Ebden than the scoreline suggested, with several games extending to deuce.

But some excellent counter-punching from the Aussie No.3 ensured he kept his nose in front. He held serve to lead 5-2, and broke in the next game to seal victory.

He moves through to a second round match with French 32nd seed Jeremy Chardy.

Matosevic goes down in five

The Australian began ideally against his more fancied opponent, serving strongly and playing steadily from the back of the court.

He benefited from the 12th seed’s extraordinary error count throughout the first two sets – Cilic committed 38, while managing just 14 winners.

But the Croatian cleaned up his game in the third and fourth sets, his winner-error ratio an improved 23-14 and helped by the Victorian’s mounting error count of his own.

Both men slugged their way through a fifth set, sapped by the battle and the oppressive humidity but desperate not to concede defeat.

But it was Cilic’s greater experience at Grand Slam level and in five set matches that ultimately proved decisive. He broke serve in the seventh game, and wrapped up the win in just under four hours with an ace out wide.