US Open: Aussies abound on Day 1

The Day 1 US Open schedule has been released, with a large Australian contingent to feature as part of the action on Monday at Flushing Meadows. 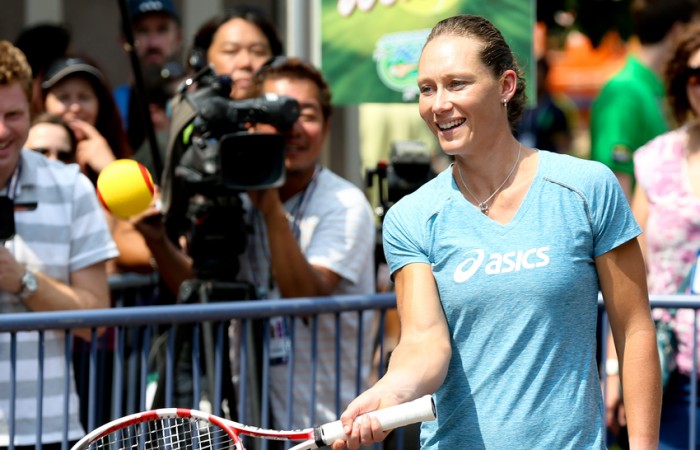 Defending champion Sam Stosur has been given the honour of opening proceedings on Arthur Ashe Stadium when Day 1 of the US Open gets underway at Flushing Meadows on Monday.

Stosur, the seventh seed at this year’s event, opens her campaign against rising Croatian star Petra Martic, currently ranked No.65.

The pair have met once before, with Stosur scraping to a three-set win on the blue clay of Madrid earlier this year, a match that had to be decided by a final set tiebreak.

While Stosur commences her match at 11am on the cavernous stadium court at the Billie Jean King National Tennis Centre, several of her compatriots will be in action at the same time.

In face, all five of Australia’s female representatives in the draw will feature on the tournament’s opening day, including Jarmila Gajdosova and Casey Dellacqua, who both hit their first balls at 11am as well.

Dellacqua comes off a career-best run in which she reached the semifinals at last week’s WTA event in Dallas as a qualifier.

She will look to continue her impressive hardcourt form on Court 12 when she battles Lesia Tsurenko, a qualifier from Ukraine ranked 112th.

Gajdosova has a far tougher task in her opening round, drawn to face No.19 seed Nadia Petrova, a Russian once ranked as high as No.3 but always dangerous thanks to a booming serve, big groundstrokes and a relentlessly attacking mindset.

It’s a far more winnable opener for Anastasia Rodionova over on Court 10, with the Aussie taking on local wildcard Julia Cohen.

Cohen, who has risen to No.101 this year, may technically start as favourite – she sits above the 161st ranked Rodionova – but she lacks the experience of her opponent, once ranked as high as No.62. The Aussie is in good form after three dominant victories in qualifying to take her place in the main draw.

Olivia Rogowska, a wildcard into the event thanks to a reciprocal arrangement between the Australian and United States tennis federations, begins her second appearance in the US Open main draw against world No.77 Mandy Minella of Luxembourg.

On the men’s side, Marinko Matosevic and Matthew Ebden have also been scheduled to contest their first round matches at Flushing Meadows.

Matosevic faces a tough assignment against 12th seed Marin Cilic of Croatia, a player who reached the US Open quarterfinals in 2009.

Yet if any time is good for an upset, it’s now, with Matosevic in career-best form, helping him rise to his current high of No.62 in the world.

Ebden faces a more forgiving opening round encounter when he takes on Japan’s Tatsuma Ito in the third match of the day on Court 14.

In addition to the Australians, there will also be plenty of international stars strutting their stuff on the Grand Slam stage on Monday, including big guns Maria Sharapova, Victoria Azarenka, Andy Murray, and US Open Series winner Petra Kvitova.