Stosur back in New York spotlight

Returning to a city she loves and driven by memories of last year's career-best result, Sam Stosur looks forward to beginning the defence of her US Open title. 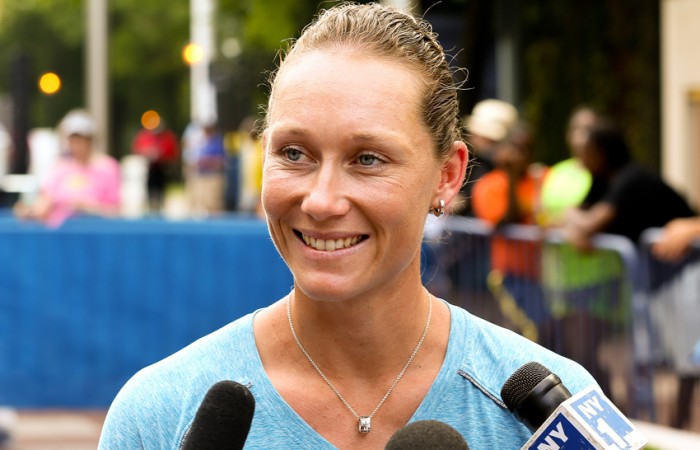 According to Sam Stosur, her win at last year’s US Open is something that will be hard to top.

“I think last year it was all the perfect build-up (for the final),” she recalls.

“Playing Serena who is one of the greatest, if not the greatest, players ever, in her home country, in New York on 9/11, and I got through that in flying colours, so that’s as good as it gets.

“If it could be better than that, hopefully that will be this year.”

We’ll soon find out if that’s the case, as Stosur has arrived in New York this week, soon to embark on a campaign to defend a Grand Slam title for the first time in her career.

It hasn’t been a quiet start. Speaking at an ASICS media event in Manhattan where she promoted her new outfit for the 2012 US Open (a sleek, sporty slate-grey dress edged in fluorescent orange for night matches, and an orange-edged white number for daytime play), it was just one of several media and sponsor-related commitments she was undertaking in the lead-up to the year’s final Grand Slam.

There was an appearance on Thursday at the US Open draw ceremony at Flushing Meadows, followed by a hit with local kids as part of a tennis clinic, plus several interviews for print and broadcast media. After the ASICS event it was off to the Taste of Tennis, a showcase of the culinary skills of New York’s top chefs and professional tennis players.

Yet after coming off a solid lead-up at big hardcourt events in Montreal and Cincinnati, Stosur isn’t particularly stressed about the glare of the spotlight that has greeted her upon arrival in New York.

“Generally I take this week off (before) from Grand Slam tournaments so I can get here early and practice and do everything I need to do,” she explains.

“I always feel better knowing that I’ve done all my work before my first round.”

She’ll be needing that good feeling given the draw she’s received. The Australian had landed in arguably the toughest quarter of the women’s draw, headed by world No.1 Victoria Azarenka and also featuring three-time US Open winner Kim Clijsters and recent Cincinnati champion Li Na.

Stosur’s first round opponent, Croatian Petra Martic, is not one to be taken lightly either. The pair met in Madrid earlier in 2012, with Stosur eeking out a three-set victory in a final-set tiebreak. The world No.7 was impressed with what she saw, remarking on Martic’s good technique and potential to be a top player.

Although she admits to being aware of who lurks further down the line, Stosur is simply focusing on the immediate task at hand.

“I’ve got to be ready and on my game, know what I’ve got to do and really try to stick to that plan, and be ready right from the first shot,” she says.

“I’m certainly not playing my first round (match) thinking about who I might play in the quarterfinals. It does sound like a very tough quarter, but again, there’s strong players everywhere … Kim and Victoria are two players that I have never beaten before, so if I end up progressing and they do too, it’s always going to be hard. But it’s the US Open, so you give it everything you’ve got.”

A more pressing priority for the seventh seed will be managing the expectations that inevitably come with being a defending champion at a major tournament. The other players in the draw will have her in their sights, and she has 2,000 points to defend, putting her top 10 ranking on the line this fortnight.

Many players have failed recently to make an impact at the Grand Slam tournament they won the previous year. Li fell early in Paris after taking the title there in 2011, while 2011 Wimbledon winner Petra Kvitova exited in the quarterfinals at this year’s event.

Yet Stosur doesn’t see the tag of defending champion as a burden. In fact, it’s much the opposite.

“Some people have always said there’s got to be so much more pressure and all this stuff, but as I’ve said before, how can it be a bad thing to go back to a place where you’ve won and had all that great success?” she says.

“It depends how you look at it really. I think it’s a great position to be in, and I’ll definitely try and defend my title while I’m here.”

It can’t be a problem that she loves coming to New York City for the city itself, a place with magnificent restaurants to sample – many suggested by one-time doubles partner Lisa Raymond – and where the fans are passionate about their tennis and supportive of their favourites.

Stosur has increasingly become one of those favourites in the Big Apple, with fans marvelling at her athletic game, booming serve and scorching forehand. Her tennis is just what the New Yorkers love – big and bold.

Since winning the Open last year, support for Stosur has become even more evident.

“For sure I get a lot more recognised now. When I arrived here in New York (on Wednesday) and I was getting a coffee, a guy stood up and said, ‘Oh, I just want to wish you good luck for the US Open this year’. That certainly wasn’t happening before last year, which is cool,” she says.

So, is a repeat of her famous victory 12 months ago at Flushing Meadows possible?

Stosur certainly hopes it is. And a re-match with Serena would be especially exciting for the Australian, given Williams’ hot favouritism coming into this year’s tournament and her increasingly strong standing among the all-time greats of the women’s game.

“I think we seem to have pretty good matches,” Stosur says of Williams. “I think we do have a really good mutual respect for each other’s games, and it’s fun to play against her.

“You want to play the best players in the world, and being able to compete with them and beat them is very satisfying. (But) to be honest I couldn’t care who the opponent was or what the score was, if I won (again). Even if it was a six-hour marathon, 7-6 in the third, that’d be fine by me.”