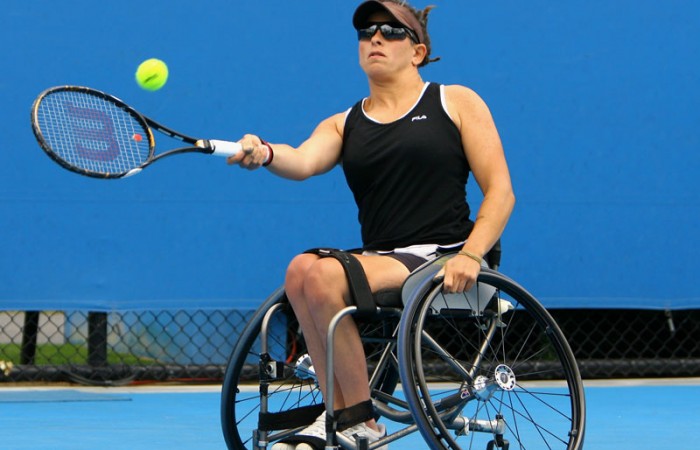 London 2012 Paralympic Games (29 Aug–9 Sept) will mark Daniela Di Toro’s fifth Games appearance, and the 37-year-old wheelchair tennis player is determined to put her recent injury woes behind her and fight for a podium position in the singles and doubles competitions.

“It’s the icing on the cake for all the hard work you put in over the years.“

To qualify for London 2012, Danni, current World No.6 had to remain in the top 24 after being sidelined for most of 2011 with an inflamed neck injury, but this did not deter the talented right-hander who still has her eyes firmly fixed on the medals.

“To be match-ready for London I have had to recover the best I could from a major injury, travel throughout the year – to get miles on the body and match practice, plus work hard on court and in the gym, and with Anthony Bonacurso the sports psych, and generally stay positive and committed,” Danni said.

Dutchwoman, Esther Vergeer, 31, will be one of Danni’s greatest threats in London. Vergeer has a 465-match winning streak and remains unbeaten since 2003 but, on the flipside, Danni was the last woman to beat the current World No.1 and reigning Paralympic champion (doubles and singles).

“Danni is in the top eight in the world so she is looking good and I think she will be at the pointy end of the competition in London,” Australian wheelchair tennis coach Greg Crump said.

The Aussie Paralympic stalwart believes it all comes down to who performs on the day.

“At this moment it’s anyone’s game,” Danni said. “All the girls are playing the best tennis of their careers and I think it’s a question of who is able to sustain that form and who copes with the conditions.”

In London, Danni, who sustained paraplegia after an accident in 1988, will contest the singles and pair with Paralympic debutant Janel Manns (Port Macquarie, NSW) in the doubles competition.

Both Danni and Janel have enjoyed a good lead-up to London with Danni claiming a singles crown on clay over World No.4 Sabine Ellerbrock (GER) at the Salzburg Open (1–5 August 2012), an ITF 1 Series tournament. She then paired with Janel to reach the doubles final at the same event but the German outfit of Ellerbrock and Katharina Kruger were too strong for the Australians.

“Australia hasn’t won a gold medal in tennis since David Hall in Sydney and we would really love to see another gold won by an Australian,” said Jason Hellwig, Australian Paralympic Committee CEO and 2012 Team Chef de Mission.