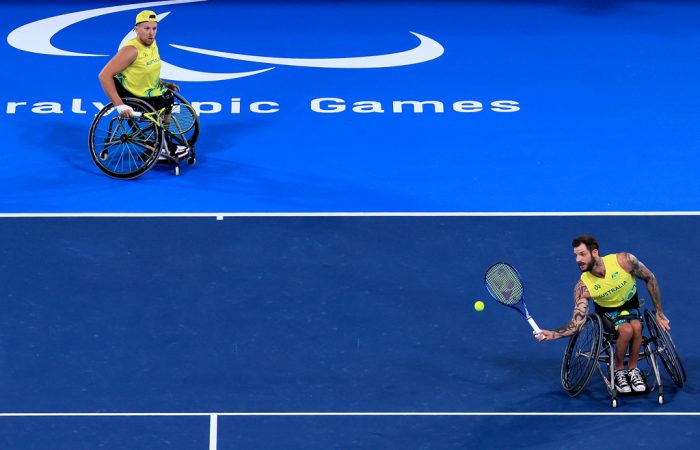 Dylan Alcott and Heath Davidson have claimed the silver medal at the Tokyo Paralympics, after Sam Schroder and Niels Vink were victorious in the quad wheelchair doubles final.

The Dutch duo were 6-4 6-3 winners at Ariake Tennis Park, completing a perfect Paralympic debut for each player.

“They were better than us. They deserved it and good on them,” said Alcott of Schroder and Vink, who are age 21 and 18 respectively. “To be that young and to bring it to us is pretty impressive.”

Schroder and Vink were a picture of calm in the biggest doubles match of their respective careers, the Dutch players unruffled by both the occasion and the calibre of their opponents.

Top seeds Alcott and Davidson were not only defending the gold medal they claimed at Rio 2016, but also hold four Grand Slam titles together – all of them at the Australian Open.

It was Schroder and Vink, however, who dominated the 44-minute first set, which was interrupted at 3-3 when the roof was closed due to light rain in Tokyo.

They carried that momentum into the second set, gaining a 3-1 lead with a break on the Davidson serve. While the Aussies claimed the break back in the seventh game, Schroder and Vink quickly recovered.

The Dutch players won the last two games to complete their victory in just over two hours, the teenage Vink serving out the important victory.

They finished the match with 15 winners and eight unforced errors, compared to eight winners and 16 errors from the defending champions.

“They blasted winners past us, first and foremost,” said Davidson. “I think my ball quality just wasn’t quite there tonight and it just put us under so much pressure. No excuses there, they played much better than us tonight.”

It marks Schroder and Vink’s third win over Alcott and Davidson, the Dutch players now holding a 3-2 winning record against the Australians.

There was still pride for Alcott in another medal-winning performance. “Sometimes it feels like you don’t win silver, you lose gold,” said the 30-year-old. “But we still won silver. We’re proud of that and we will be forever.”

Other positives to take from a fourth straight Paralympic appearance were more personal for Alcott. “Win, lose or draw, Heath’s my best mate,” he added.  “Medals come and go but that friendship stays forever.”

Alcott will have a chance to atone for the loss when he faces Schroder in tomorrow’s quad wheelchair singles final – an occasion he sees as a team effort.

“I’m going to rest and recover and come out here. I hope to make the whole of Australia proud tomorrow night with my effort and we’re going to do it together, that’s for sure,” he said.

“Even though I’m the one in the singles final tomorrow, it’s ‘we’ out there – because we are a team and we’re going to make everyone proud with what we do. Not only tonight but tomorrow as well.”

It will be his third straight match against Dutch opponents in Tokyo; the Australian earned his place in a second straight final with a three-set semifinal win over Vink on Tuesday.