Dylan Alcott wins a second quad wheelchair singles gold medal at the Tokyo Paralympics, creating the chance to complete a Golden Slam at the US Open. 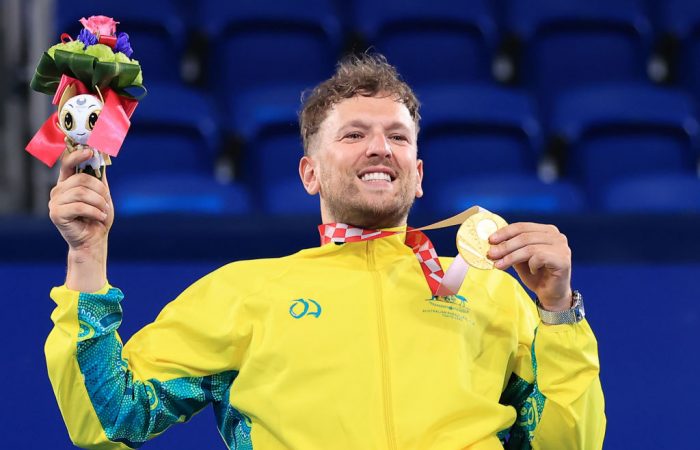 Ahead of the Tokyo 2020 Paralympics, Dylan Alcott insisted he was determined to simply embrace the opportunity to compete in the most important event on the wheelchair tennis calendar.

By adding to his gold medal collection with victory over the Netherland’s Sam Schroder in today’s quad wheelchair singles final, an elated Alcott undeniably achieved both those things.

“That was the hardest tournament I’ve ever played. I feel like an old ancient man. I’m in agony,” said Alcott, who defeated Niels Vink in a gruelling two-and-a-half hour semifinal to earn his place in the final.

“Niels in the semi, Sam today. I’m just so thankful and grateful that I was able to get it done.”

It was a fourth Paralympic gold medal in total for Alcott, who won gold with the Australian Rollers basketball team at the Beijing 2008 Paralympics and also claimed the Rio 2016 quad doubles title with Heath Davidson.

But this was arguably the most special Paralympic victory, Alcott confirming after the final that he’d competed for the last time at this event.

“I worked so hard. The Australian public’s got behind me and my career. The whole Paralympic movement. I’m just such a proud Paralympian. I’m proud of my disability,” said an emotional Alcott.

“I won’t come back to the Paralympic Games, that’s it for me here so it meant a lot to me.”

It also adds to a near-perfect record for Alcott in the 2021 season – the Australian has lost just one match this year, doing so against Schroder in the semifinal of the French Riviera Open.

The 21-year-old Dutch player entered today’s gold medal match with impressive momentum, after combining with Niels Vink to defeat Alcott and Davidson in the quad wheelchair doubles final on Wednesday.

“How good did the Dutch kids get?” said Alcott, referencing the extra year after the Paralympics were delayed due to the pandemic. “It’s the sweetest of all my wins because I got pushed and they’re awesome.”

Schroder claimed an immediate break back and with his winner tally quickly growing, the world No.2 gained another break in the crucial seventh game and served for the set two games later.

But competitive spirit is intrinsic to the 30-year-old Alcott, evidenced by his 14 Grand Slam singles titles.

Three of those victories have been achieved this season, with every major final victory won against his Dutch opponent.

With the Australian’s cries of “C’mon Dylan” and “great job, Alcott” ringing around the Centre Court, Alcott summoned the necessary intensity.

Knowing that this would be his final Paralympics event helped. “I’m a really thankful, grateful, talkative guy so why not go ‘how good’s this?’ I trained my whole life for this. I’ve got an opportunity to go out winning a gold medal,” said Alcott.

The shift in attitude created a shift in momentum, Alcott forcing a tiebreak in the first set. Brandishing some superbly placed winners, he allowed Schroder just two points as he closed it out in 53 minutes.

The gold medal was soon in sight as the defending champion claimed a double break of serve to take a 3-0 lead in the second set.

While Schroder wrestled one break back, Alcott’s determination couldn’t be dented; the Australian won three straight games and secured his milestone victory with a backhand winner.

It was one of 35 winners for Alcott, compared to 29 from Schroder. The unforced error count also tipped in favour of the champion, who recorded four less than his Dutch opponent’s 20.

With victories also secured at the Australian Open, Roland Garros and Wimbledon this year, Alcott now has the opportunity to claim a Golden Slam.

Tomorrow, Alcott will travel to New York to contest the US Open, where he is a two-time singles champion.

First, though, there was this important milestone to celebrate, Alcott smiling through tears as the Australian national anthem was played during the medal ceremony.

“I couldn’t care less right now. I’ve got to celebrate this for what it is. Which is, you know, one of – if not the – biggest achievements of my career,” said Alcott, who thanked family, friends and his tight-knit team for helping him persist through a “dark time” when the Paralympics were delayed.

“Because of Heath and Francoise and my team, we found a way to keep motivated,” said Alcott.

“I’ve got a few more tournaments left in me but not three years ­– so how special is it to go out on top like this?”