World No.1 Dylan Alcott survived an epic test against Niels Vink to progress to the gold medal match at the Paralympic Games. 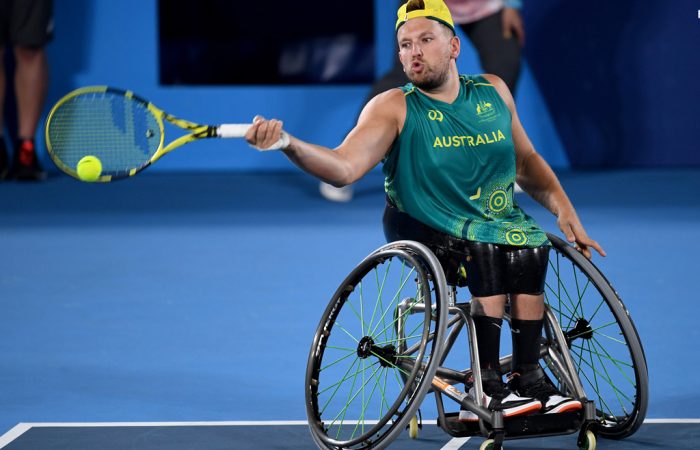 “The best match – not best quality start to finish, but the best contest I’ve ever been a part of.”

Taking two-and-a-half hours to secure victory, Alcott added to his many Paralympic milestones.

The 30-year-old claimed gold with the Australian Rollers basketball team at Beijing in 2008 and added a basketball singles medal at the London Paralympics in 2012.

But it’s in tennis that Alcott has secured some of his strongest memories, including gold medals in both singles and doubles (with his close friend Heath Davidson) at Rio in 2016.

The epic encounter with Vink adds to the rich memory bank, and Alcott’s love for this event.

“To win it, to pull that out, is the proudest I’ve been on the tennis court I think and that’s why I love the Paralympics. It’s my favourite place in the world,” he said.

“To play the best match you’ve ever played in the best place in the world, to me, is why I do what I do.”

Competing in his first Paralympics, Vink competed like a man many years older as he pressured the defending champion from the very first point.

The 18-year-broke the Alcott serve in the opening game and soon held a 2-0 lead over the Australian, who battled back to level for 3-3.

In the absence of crowds at Ariake Tennis Court, a determined Alcott created his own energy, the cries of “C’mon Dylan” consistently ringing around the Centre Court as he wrestled control.

The start of the second set followed a similar pattern, Vink leading 2-0 and piling pressure on Alcott. After exchanging service breaks in the fourth and fifth games, the teenager was growing in confidence.

There was a brief break as the Centre Court roof was closed due to rain, Vink eventually taking the set in 56 minutes.

Into a decider, Alcott asserted early authority. He built a 2-0 lead but there were four breaks of serve – two for each player – before the Australian at last earned his first match point.

Vink saved one in an epic rally but couldn’t manage another, Alcott finally triumphing o his second match point.

“That match point save was like a 50-shot rally. He’s 18! I’m just so proud of him, because we’re friends … it’s just awesome to share it with him,” said Alcott.

Underlining the tight challenge Alcott had navigated, Vink’s 43 winners were 18 more than the Australian’s. Alcott recorded 20 unforced errors compared to 24 from the teen.

The contrast between experience and youth was made clear as the 30-year-old Alcott comforted the distraught 18-year-old after the difficult loss.

But after delivering a classic in the highest stakes setting, Vink’s had also underlined his status as the future of the sport.

“He’s 100 per cent going to win a gold medal in singles, for sure,” Alcott said.

The emotions are high as Dylan Alcott and Niels Vink hug it out after their incredible match ❤️#Tokyo2020 | #Paralympics pic.twitter.com/BNxkEpN2xT