In tennis' short recent history as part of the Games it has thrown up some incredible moments – and we’re going to take you back through 10 of the best.

Tennis returned to the Olympic Games as an official sport in 1988 after a 60-year hiatus. In its short recent history as part of the Games it has thrown up some incredible moments – and we’re going to take you back through 10 of the best.

10. Federer wins Olympic doubles gold – Beijing 2008
Olympic singles gold is an achievement Federer covets highly, yet one that has so far eluded him. It’s the only major accolade he’s yet to gain in his glittering career, and realistically, he has just one, or at best two, chances remaining to do so. Gold in doubles is the next best thing, which goes some way to explaining Federer’s unbridled joy when he and partner Stanislas Wawrinka clinched gold for Switzerland in the Olympic doubles event at Beijing. We’re not quite sure how to interpret the slightly bizarre post-match celebration as seen in the second video, but hey, it’s hard to know how anyone would react in the spur of a similar moment.


9. Rosset’s unlikely win – Barcelona 1992
Amid all the talk of Federer’s lack of singles success at the Olympics, what is often overlooked is that Switzerland already has a gold medallist in that very event. The lanky Marc Rosset, who peaked at a career high ranking of No.9 in 1995, stormed through the draw as an unseeded player and eventually defeated Spanish No.16 seed Jordi Arrese in the final. In comparison to the blockbuster women’s final between Jennifer Capriati and Steffi Graf, the men’s final significantly lacked star power, but the five set thriller that played out was a match for the ages. Rosset withstood his opponent and the highly partisan crowd – who whistled angrily as he moon-balled on match point – to carve his niche in both tennis and Olympic history.

8. Federer’s shock loss to Berdych – Athens 2004
Probably Federer’s best chance to win Olympic singles gold came in Athens 2004, when he was the reigning Wimbledon and Australian Open champion and Rafael Nadal was yet to be a force in the game. But when he came up against the then little-known 18-year-old Tomas Berdych, he wasn’t prepared for the powerful barrage he was about to face from the Czech. Berdych, ranked No.79 at the time, created one of the biggest upsets in Olympic history when he knocked out the Swiss in the second round.
http://www.youtube.com/watch?v=Yg-oNe8K_I8

7. Gonzalez v Blake controversy – Beijing 2008
At 9-8 in the third set of their epic semifinal in Beijing, James Blake hit what he thought was passing shot winner It reportedly clipped Fernando Gonzalez’ body as it went past, thus giving the point to the American. But Gonzalez refused to acknowledge this fact and the umpire never awarded in favour of Blake, and just a couple of games later, Gonzalez has secured his place in the gold medal match. It was a frosty handshake between the pair after a magnificent match, which ended with Gonzalez triumphing 4-6 7-5 11-9.

6. Dementieva wins gold – Beijing 2008
Often described as the best player never to win a major, Elena Dementieva achieved a feat that many Russians would consider even finer than a Grand Slam title when she won singles gold in Beijing. Her joyous celebration after victory over compatriot Dinara Safina signalled how much the win meant to her, and iced the cake on an outstanding career. It was an extremely successful tennis event for Russia that year, with Vera Zvonareva taking bronze to see the Eastern European nation scoop all the medals in the women’s singles.

5. Australian medallists – The Woodies and Alicia Molik
Australia has a proud history at the Olympic tennis event, and thanks to Mark Woodforde, Todd Woodbridge and Alicia Molik, a complete set of coloured medals. At Atlanta 1996, the Woodies won a prized gold medal with their victory over Brits Tim Henman and Neil Broad, before claiming a silver in doubles at their home Olympics at Sydney in 2000. Alicia Molik enjoyed a fabulous tournament in singles at Athens four years later, winning the bronze medal playoff over Anastasia Myskina. It kicked off a purple patch for the Aussie, who went on to enjoy a stellar six months that culminated with her entry into the WTA top 10. 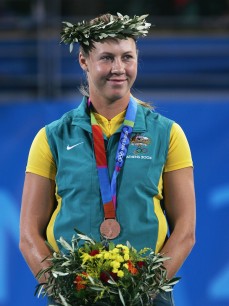 4. Henin’s epic comeback – Athens 2004
Taking nothing away from Molik’s win over Myskina in Athens, there was no doubt the Russian put in a lacklustre performance in the bronze medal playoff. A major contributing factor was no doubt her semifinal loss to Justine Henin, in which she led 5-1 in third set lead only for the Belgian to come roaring back. Henin’s eventual 7-5 5-7 8-6 win sent her into the gold medal match against Amelie Mauresmo, which she also won. It was an incredible achievement by Henin, playing in her first event in three months due to being sidelined with cytomegalovirus. Her comeback against Myskina begins at the 6:15 minute-mark of the video highlights.

3. Capriati’s golden triumph – Barcelona 1992
Jennifer Capriati staked her claim as one of the most exciting young prospects in the game, when, as a 16-year-old, she won Olympic singles gold with defeats of two of the game’s finest players. In the semifinals she upended local Arantxa Sanchez Vicario in three sets before recording a massive upset victory over Graf, the reigning Olympic and Wimbledon champion, also in three.

2. Graf’s Golden Slam – Seoul 1988
Perhaps the disappointment of Graf’s loss in Barcelona was tempered by the knowledge of what she’d achieved four years earlier. The German legend did what no other man or women has ever done before (or after), winning the four major titles plus Olympic gold in the one year to complete an incredible Golden Slam. After surviving the pressure-filled atmosphere at the US Open that accompanied her Grand Slam campaign, Graf was far more relaxed in Seoul, and smacked her way past Gabriela Sabatini in a straight-set final.

1. Massu’s golden double – Athens 2004
He was ranked 14th in singles and 68th in doubles before heading to Athens. But something magical happened to Nicolas Massu when he arrived in the city known as the birthplace of the Olympic Games. The Chilean tipped the form book on its head, combining with compatriot Fernando Gonzalez to win men’s doubles gold, and coming back just 13 hours later after that gruelling five-setter to play out a similar epic in singles. He recovered from two-sets-to-one down to beat American Mardy Fish for gold. Possibly the only person more excited than Massu was the Chilean commentator on the video highlights.