Tough day for Aussies at Wimbledon

It was a hard day at the office for the Australians on day two of The Championships. 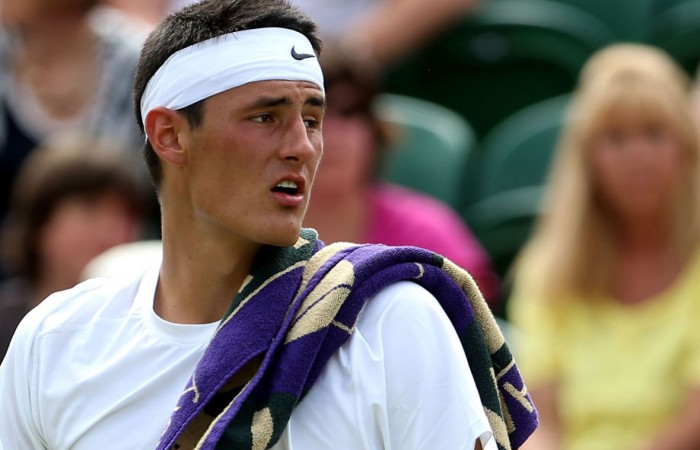 It was a hard day at the office for the Australians on day two of The Championships.

Early exits for Bernard Tomic, Lleyton Hewitt and Matt Ebden on Tuesday left Australia without a men’s singles representative in the second round at the All England Club.

Tomic’s sorry demise was also a costly one personally after the exciting teenager last year became the youngest quarterfinalist at the All England Club since Boris Becker in 1986.

His failure to defend those points will lead to a tumble down the standings from No.28 in the world to outside the top 40 – or worse.

“It’s hard. To see what you did last year and to lose first round is difficult,” Tomic said.

“But there’s a reason why I lost, I have to say. He played much better and I wasn’t playing the right tennis. No excuse.

“The last few weeks have been a little bit tough on me. I have gone through a match where I should have won and been sick for a week.

“But, look, I take that as a learning curve. You’re not going to improve unless you learn.

“That’s why it’s important for me at a young age – for any player that’s young – is to, I think, lose. You’re only going to come back stronger if you keep losing.

“I can’t say anything wrong. He played well today from the second set onwards.”

Despite his own lowly ranking of No.70 in the world, Goffin arrived in London with high hopes after bursting to prominence with an eye-catching run from qualifying to the last 16 at the French Open.

Showcasing his talents, the 21-year-old took the opening set off Roger Federer at Roland Garros before the Swiss maestro finally eliminated Goffin in four.

Tomic was favoured to have too many guns for Goffin on grass, but the Belgian barely missed and scrambled like a terrier to have Australia’s 20th seed under enormous pressure throughout.

Tomic’s frustrations boiled over after he dropped serve in the opening game of the pivotal third set and he obliterated his racquet, resulting in a code violation for unsportsmanlike conduct.

His departure left the Queenslander without a single win from three grasscourt tournaments since the French Open.

He quit mid-match against Tommy Haas in his opener at Halle, citing illness, before blowing a big lead in a first-round loss to Italian Fabio Fognini at Eastbourne last week.

Tomic conceded he was only 70 to 80 per cent fit entering Wimbledon after battling a virus post-French Open and he was clearly struggling physically as he gasped for air and clutched his lower back during his loss to Goffin.

As well as Hewitt, Tomic and Ebden, two Australian women crashed out on Tuesday, leaving US Open champion and world No.5 Samantha Stosur to fly the flag.

Stosur plays unseeded Dutchwoman Arantxa Rus on Wednesday night for a place in the third round.