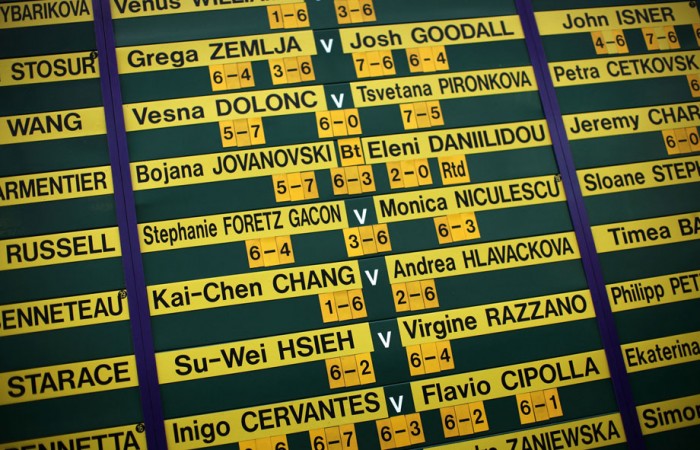 Tomic, the 20th seed, faces 21-year-old Belgian David Goffin who surprised many with his run to the fourth round at Roland Garros as a qualifier. This will be their first meeting.

Hewitt has a big task against fifth seed Jo-Wilfried Tsonga in what looms as an intriguing Court 1 battle. Despite being ranked No.202 in the world Tsonga will not be taking this match lightly. Tsonga leads their head-to-head 2-0, with their last on-court meeting in 2008.

Ebden meets a less-fancied Frenchman in world No.55 Frenchman Beonoit Paire for the first time. Paire comes into Wimbledon having made it to the semifinals at s’Hertogenbosch last week and earlier this year was a finalist at the ATP event in Serbia. Ebden’s grasscourt credentials aren’t bad either – a second-round showing at Queen’s and four matches at Eastbourne – three in qualifying – will have the West Australian feeling comfortable on grass.

Dellacqua plays former runner-up and ninth seed Marion Bartoli, in the second match of the day on Court 12. There may be almost 100 ranking places between these two but Dellacqua is capable of causing an upset. Bartoli leads their head to head 2-1 but Dellacqua won their most recent match at Roland Garros in 2008.

Sixteen-year-old reigning junior champion Barty is hoping to capitalise on her wildcard against Italian 21st seed Roberta Vinci. This will be Barty’s first Wimbledon main draw match, while Vinci is contesting her seventh main draw.